Marie from the Bay of Angels (Marie Baie des Anges)

The following weapons were used in the film Marie from the Bay of Angels (Marie Baie des Anges): 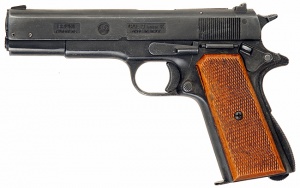 Orso pulls a gun on the bar owner and his wife.

This replica gun Colt M1911A1 has a characteristic sights.

Marie found in a compartment on the dashboard of the car Orso´s gun.