Maniac is a 1980 American exploitation slasher film directed by William Lustig and co-written by known character actor Joe Spinell. It is mostly notable for Spinell's portrayal of a psychotic serial killer Frank Zito as well as incredible special make-up effects by genre guru Tom Savini and neo-noir dark romantic depiction of New York, all these while not being stripped of social content and sense.

A sequel, Maniac 2: Mr. Robbie was partially filmed in 1986 but abandoned and eventually not completed after Spinnel's death in 1989. Another half-abandoned idea was the crossover with Maniac Cop franchise (though, Maniac Cop 2 still has a similar character portrayed by Leo Rossi, as well as being dedicated to Spinell who is nicknamed "Maniac" in the end credits). Also in 1989, movie was unofficially remade in Greece as The Sigrou Street Strangler. In 2012, an official remake (produced by Lustig) starring Elijah Wood as Frank Zito premiered in Cannes, followed by successful theatrical and video releases in 2013.

The following weapons were used in the film Maniac:

Frank Zito (Joe Spinell) uses a 12 Gauge Double Barreled Shotgun in the most famous scene of the movie, where he shoots disco boy (special effect makeup artist Tom Savini) and disco girl (Hyla Marrow) with it in their car. Zito uses a violin case to illegally hide his weapon, when he's in the city. 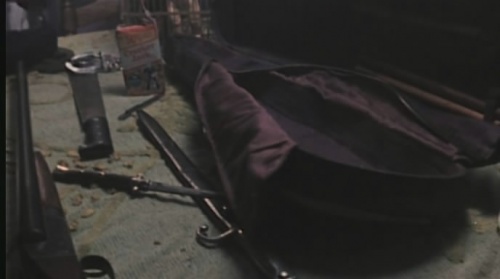 Zito's table. Shotgun is on the left, waiting to be put in the violin case.Also note the stiletto, bayonet, and machete. 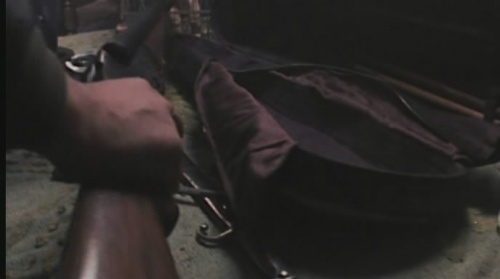 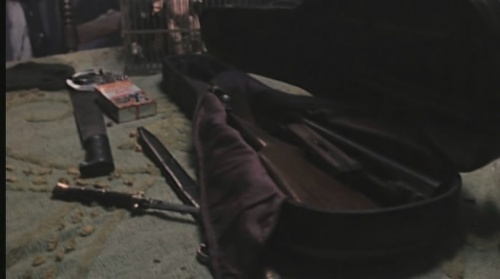 Shotgun in the violin case. 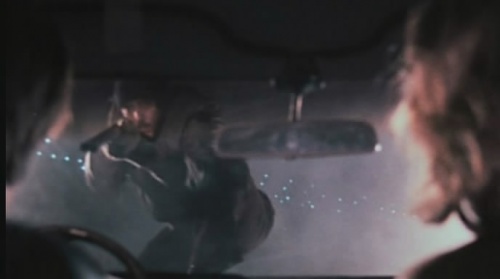 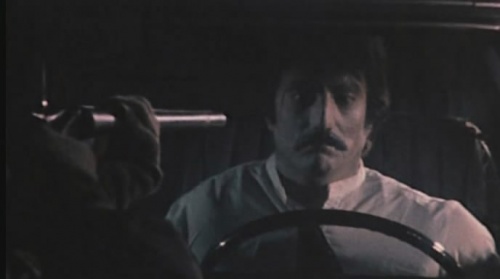 Zito aims his shotgun at disco boy. Note that disco boy is a special effects dummy (though really well made). The hands are those of Tom Savini making it so he's shooting himself in this scene. 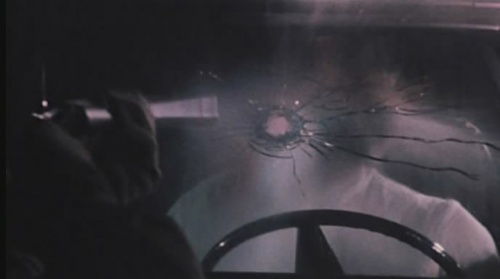 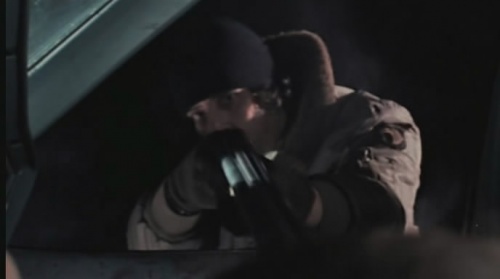 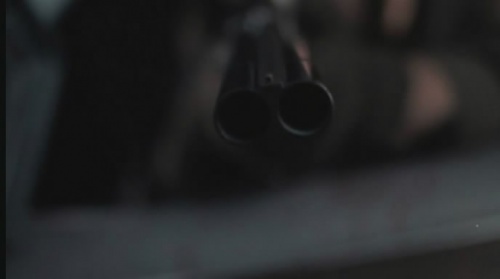 Close up of shotguns barrel from disco girl's point of view. 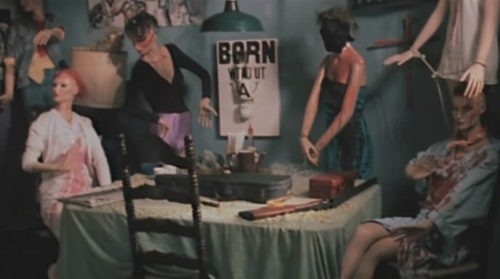 Shotgun among with pistol case and violin case on the table near the end of the movie. 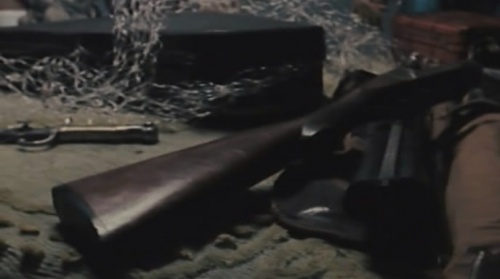 Shotgun on the table.

Frank Zito uses thr Benjamin EB22 air pistol (an older version with an attached front sight) held in a special case, while practicing shooting in his apartment. He does fire the gun at a target painted on the wall (a little bit bigger then a .22 pellet should do, though). 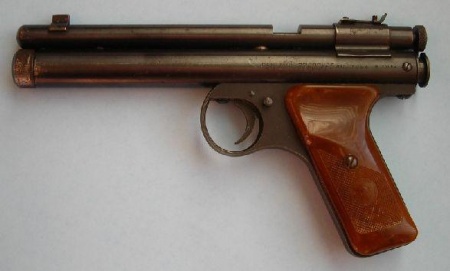 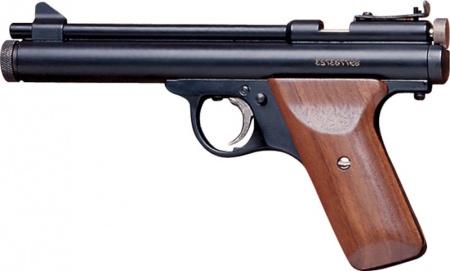 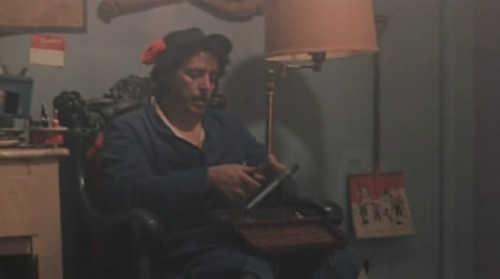 Zito taking the pistol from the case. 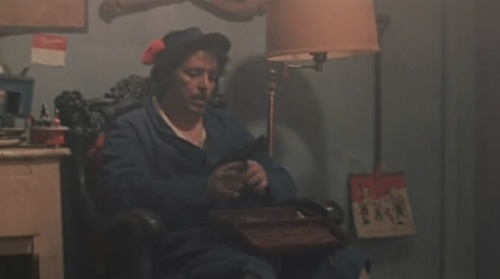 As you can see, Zito has no trigger discipline. He's a maniac, after all... 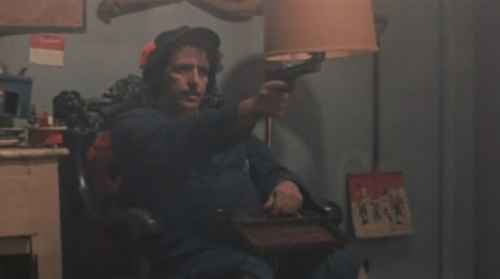 Zito aims his pistol at the wall and fires. 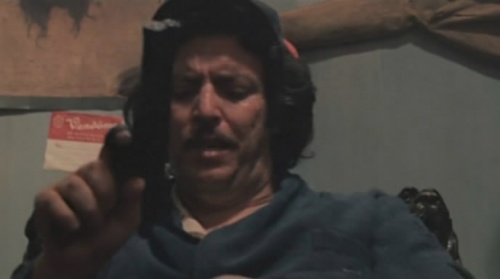 Zito with his gun (a detailed shot). 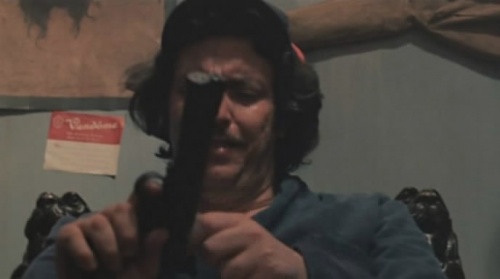 Zito with his gun (additional details). 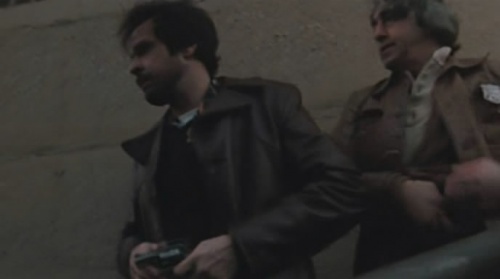 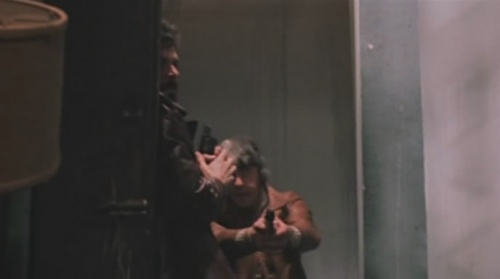 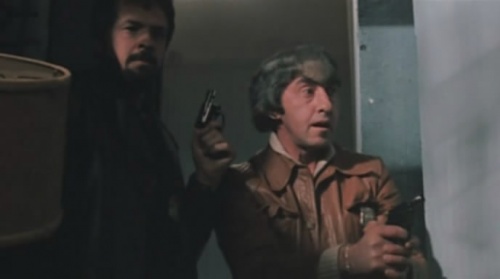 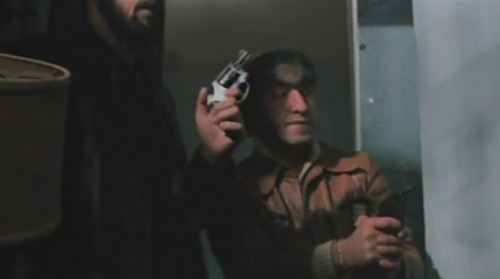 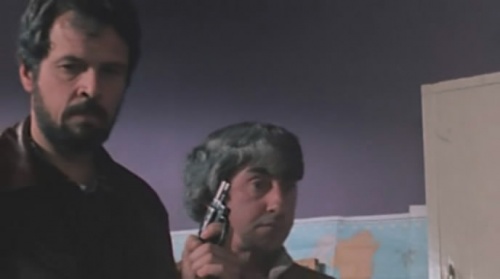 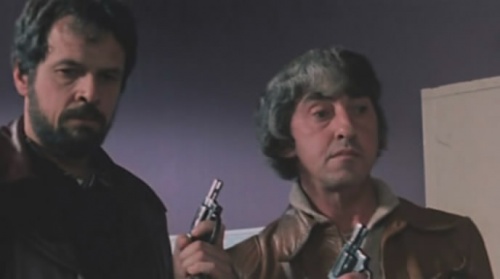