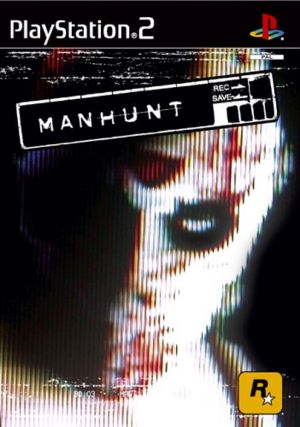 Manhunt is the first game in of Rockstar's more controversial franchises. James Earl Cash, a death row prisoner, is forced to participate in a series of snuff films for an underground director, former film producer Lionel Starkweather (voiced by Brian Cox).

Manhunt has been banned in several countries and implicated by the British media in a UK murder shortly after its release (to be exact, implicated by the victim's mother; as it turned out, she was so familiar with the game because it was the victim who owned a copy of Manhunt, not his killer).

The following weapons can be seen in the game:

The Smith & Wesson Model 586 is used by many of the game's characters, and is referred to in-game simply as the "Revolver" (though it is named the ".38 Revolver" in the game's manual). It is often the only handgun available for much of the game. It holds 6 rounds and is reloaded round-by-round rather quickly by in-game characters, which is surprising given that none of them are seen to use speedloaders or similar devices to reload this weapon. 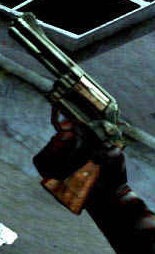 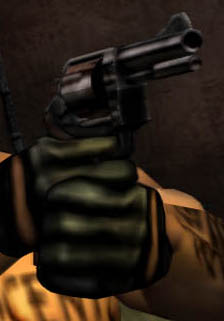 Another view of the ".38 Revolver"

Called a "Light Handgun" or "GS Model 23" in the game, the Glock 23 is used in the game by a few gangs (most notably the "Smileys") and by Lionel Starkweather's (the "director" who tells you what to do and where to go in the game) personal henchmen. The gun itself is almost a carbon copy of the Glock, with only slight differences in the name and model. For example, the seven slide grooves are now at the front where as the real steel version has them at the back. It is even chambered in .40 caliber. 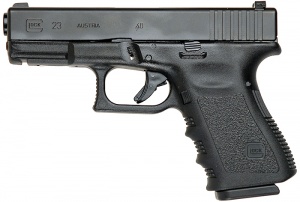 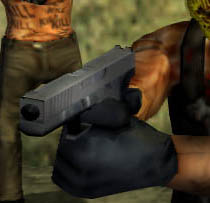 The Desert Eagle appears as the 'Heavy Handgun' or the more decorative 'Avenger Force .50 AE GS' in the game. It is used in the latter stages of the game by Carcer City SWAT officers and the Cerberus assault team. Like the Glock, the gun is almost an exact replica of the .50 caliber monster. Subtle differences that can be spotted is that the gun, whilst being chambered in .50 Action Express, holds 9 rounds which is what the .357 version of the Desert Eagle holds. 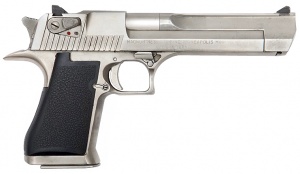 Powerful up close, the Double Barreled Sawed-Off Shotgun is used and seen in many areas of the game. The make and model are unclear. It fires two 12 gauge cartridges, although it is depicted in-game with huge barrels, implying that this is a very large-caliber gun. 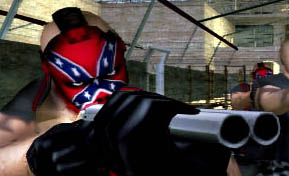 The sawed off shotgun in the hands of some dangerous people. 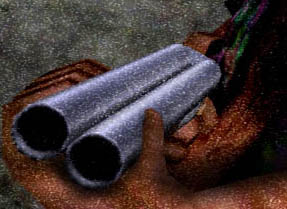 The Franchi SPAS-12 appears as "Sap 12" or "12-Gauge" in the game. Variants of this gun are carried by the CCPD/SWAT team as well as Cerberus with flashlights attached. This is the same model of SPAS-12 which was used in the early version of GTA: Vice City. 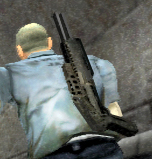 Used in only a few missions, the Enfield Enforcer fires 7.62mm ammunition with an incorrect six shot capacity, as opposed to the correct 10. The gun appears to be bolt-action and very accurate. Its in-game name is simply "Sniper Rifle", but the manual's name for it is "IDK Type 2 Sniper." It should be noted that its HUD icon displays the PSG-1, which gives a hint that it was originally used instead of the Enfield. 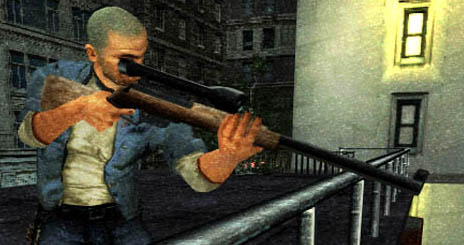 The sniper rifle being aimed by Cash.

A mash-up of a Uzi and a MAC-10 (although it looks more like the Uzi), this fictional weapon has good range and fair accuracy, as well as a high rate of fire. It is referred to simply as "Sub-Machine Gun" in-game, as well as the "Spaz Mark 1" in the game's manual. This SMG is primarily carried by CCPD officers and SWAT personnel in the game, and it is also seen in the hands of "The Skinz" as shown in the promotional picture below. 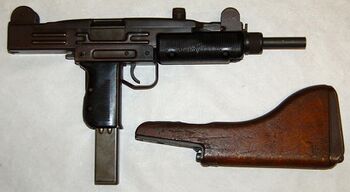 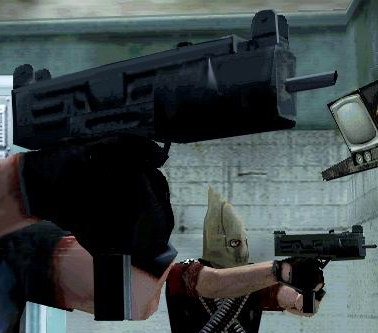 The "Submachine Gun" in Manhunt.

The M16A2 rifle is called the "Defender Mark 1", and can be fired in semi or fully automatic. The original textures of the weapon are based on the M933, and modified to resemble an M16A2. The carry handle texture is chopped in such a way as to have the thumb nuts removed, the collapsible stock reshaped into a fixed one and the handguard is elongated. The game manual also states that the weapon has 990mm total length and 533mm barrel length which is in line with M16 parameters. However, the shorter in game barrel appears to be due to recycling the barrel directly from the original texture which is actually an 11.5" barrel as can be seen in Manhunt 2 where the unmodified original texture is used. The gun also holds 30 rounds, despite being fitted with a 20-round magazine. The gun is quite powerful; 2-3 shots to the body will kill, where as a shot to the head will remove most of it entirely. It is only seen in the last few levels of the game in the hands of Cerberus agents.

Colt Model 933 with bayonet lug deleted and thinner A1-profile barrel - 5.56x45mm. This is essentially the configuration of the original unmodified textures. 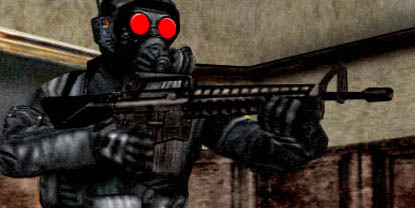 A Tranquilizer Rifle, reminiscent of a Ruger 10/22 fitted with a suppressor. While technically not a firearm, it is the most nonviolent way to subdue an enemy. It is used in only a few missions. The gun fires .50 caliber Ketamine shots, enough of a dosage to make Mike Tyson fall asleep. 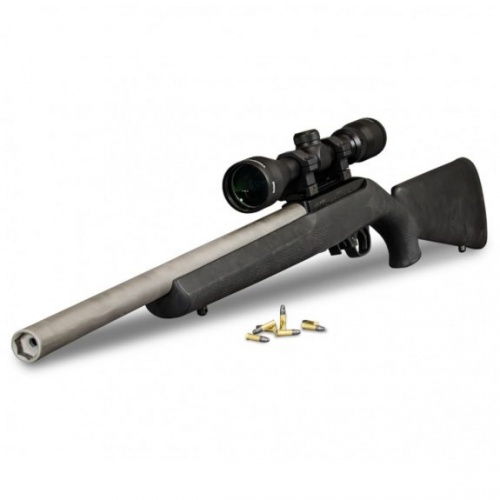 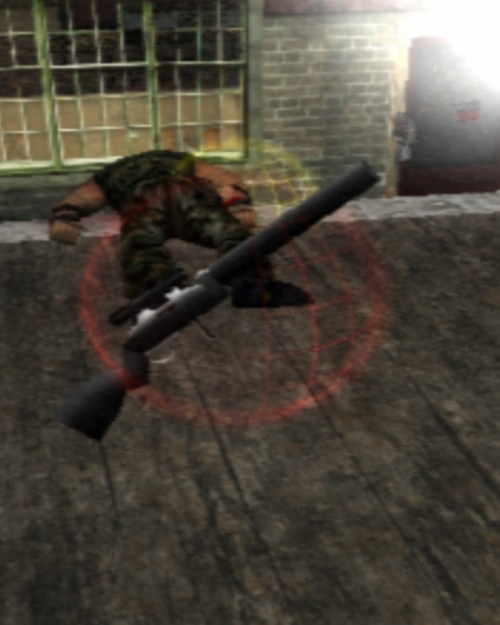 The world model of the Ruger 10/22-based rifle. 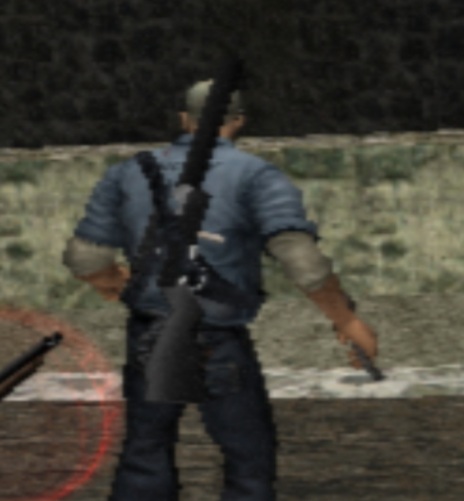 The rifle carried by Cash.

The PSG-1 was to appear as a second (or, more likely, the initial) sniper rifle, but was removed before the final release.

The render of the removed PSG-1

The MP5K is an another cut weapon. As with several other Manhunt weapons, for some mysterious reason it can be found in the GTA: San Andreas game files. It may have been the original in-game submachine gun, later replaced by the mutant Uzi. 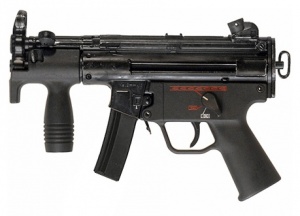