Madigan is a 1968 crime drama that many consider to be one of the transitional movies from the Joe Friday Dragnet-type of police procedurals of the 1960s to the grittier Popeye Doyle/Dirty Harry detectives of the early 1970s. In many ways, Madigan has an old fashioned feel to it. Based on the 1962 novel "The Commissioner" by Richard Dougherty, the film's story feels almost like an Arthur Hailey novel. The film focuses on N.Y.P.D. police commissioner Anthony Russell (Henry Fonda), who is dealing with a crisis filled weekend while Detectives Madigan (Richard Widmark) and Bonaro (Harry Guardino) pursue a murder suspect (Steve Ihnat) who has evaded them and gotten their revolvers as well. In the hands of a lesser director, the film might play as a glossy melodrama, but director Don Siegel turned it into a suspenseful melodrama with a couple crackerjack action sequences. Madigan would later be adapted into an NBC television series of the same name with Richard Widmark reprising his role.

The following weapons were used in the film Madigan:

At the climax of the movie as they are preparing to take down Benesch (Steve Ihnat) N.Y.P.D. Detectives Daniel Madigan (Richard Widmark) and Rocco Bonaro (Harry Guardino) carry Smith & Wesson Model 10 snubnose revolvers. In addition ,in what can only be a continuity error, Benesch is shown using a S&W Model 10 snubnose in several scenes. 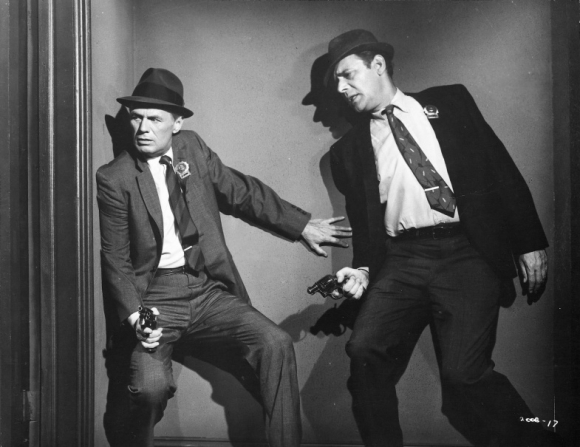 Benesch (steve Ihnat) guns down two N.Y.P.D. uniformed officers when they attempt to stop him. He uses a S&W Model 10 snubnose revolver. This in itself would be no big deal, but he drops it at the scene and the police commissioner is shown looking at it. Only in the following scene it's a Smith & Wesson Model 36 Chief Special and Detective Madigan identifies it as being his revolver. The same revolver that Benesch took from him.

At the beginning of the movie when Detectives Madigan and Bonaro are looking for Barney Benesch (Steve Ihnat) they are carrying Smith & Wesson Model 36 "Chief's Special". Benesch later uses the revolvers as well (having taken them from the detectives at gunpoint).

The Police Commissioner shows Madigan his own Smith & Wesson Model 36 "Chief's Special" that was stolen from him by Benesch and then used to gun down two N.Y.P.D. patrol officers. Note the old Fitz Ten Ring Grip on it. This style of aftermarket grip was very popular from the Forties through the sixties and into the seventies.

N.Y.P.D. officer tries to shoot Benesch with his standard Smith & Wesson Model 10 after being shot by him

Lt. Price (Frank Marth) carries a Colt Detective Special which he draws during the climax when the N.Y.P.D. corners Benesch.

Benesch (Steve Ihnat) carries a Model 1911A1 Government throughout the movie.

The movie was filmed in the summer of 1967. Several years before the S.W.A.T. team would make it's appearance. When the police finally corner Benesch (Steve Ihnat) in an apartment he barricades himself. The police use a full size 12 Gauge Double Barreled Shotgun to blow off the lock to the door in order to make entry.

During the stand-off with Benesch the police use what appears to be a Federal L5 Gas Riot Gun. 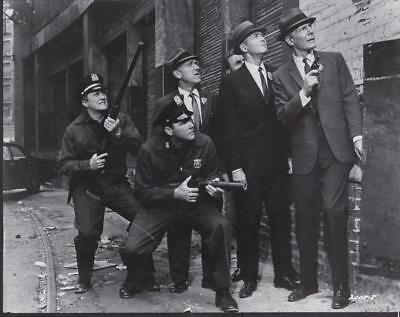