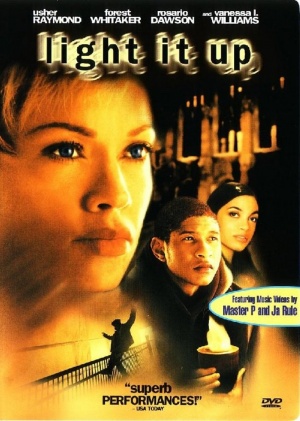 The following weapons were used in the film Light It Up:

The most frequently seen weapon in the film, the Glock 19 is the standard-issue sidearm of NYPD officers, including Officer Dante Jackson (Forest Whitaker). When Jackson tries to forcibly remove one of the students from the school after he and several others protest the suspension of a popular teacher, Jackson's Glock comes out of his holster and is picked up by Zacharias 'Ziggy' Malone (Robert Ri'chard) out of fear of being sent back to his abusive father. In the struggle to retake the weapon, Jackson takes an accidental shot to the leg. The Glock is then taken by Lester Dewitt (Usher Raymond), who demands everyone leave the school except for himself, Jackson, Ziggy, and four other students, resulting in the hostage situation that lasts the majority of the film. In a few shots, a flashbulb-firing Non-Gun can be seen standing in for the real Glock 19. 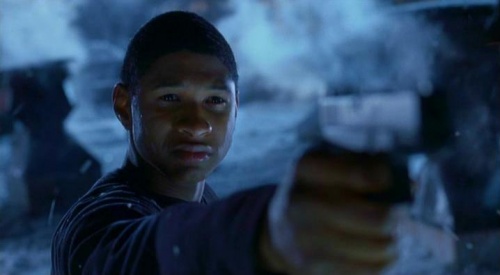 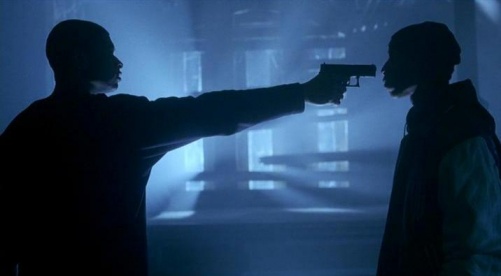 Lester Dewitt holds Jackson's Glock 19 on Rodney J. Templeton (Fredro Starr) when the two have an argument about how to resolve the siege. 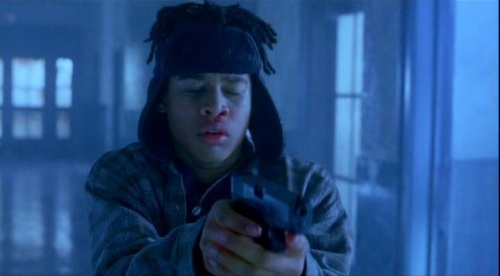 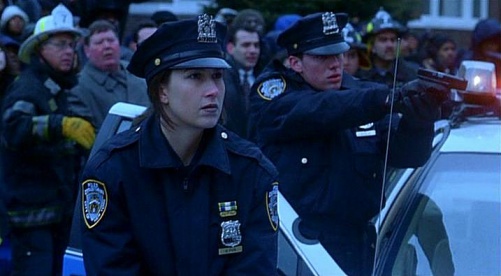 An NYPD officer brandishing a Glock 19 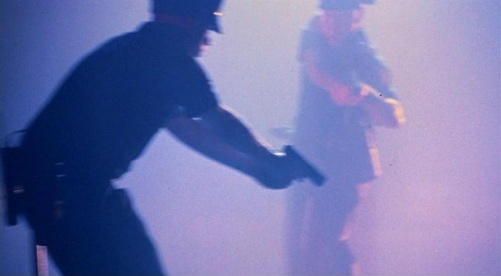 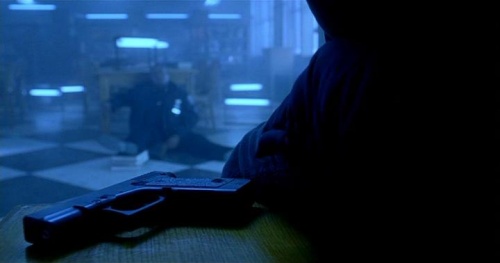 Closeup of the fake Glock

At one point in the film, Lester recounts an incident where his father (Robert Minor) was fatally shot by NYPD officers when they believed he was reaching for a gun when in fact he was trying to get an inhaler since he was having an asthma attack, one of the officers in the flashback briefly shown firing a Glock 17 instead of a Glock 19 like the other officers in the film carry. 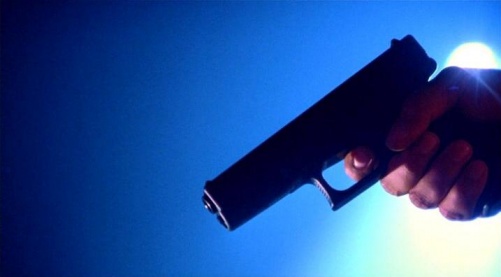 A closeup of an NYPD officer's Glock 17 during Lester's flashback

The Heckler & Koch MP5A3 appears in the film being used by NYPD ESU officers responding to the hostage situation. As per the norm with SWAT weapons, they're equipped with Surefire dedicated forend weaponlights, some of them also having laser pointers. 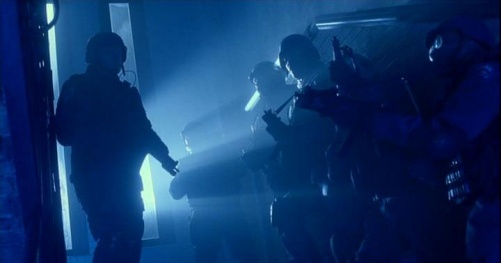 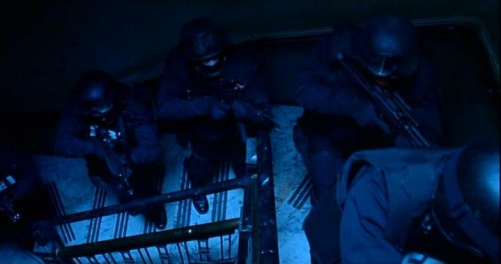 NYPD ESU officers brandish laser-equipped Heckler & Koch MP5A3's, this is actually stock footage from the 1998 film The Siege except its tinted in blue (note the "FBI" patches on their vests)

The Ithaca 37 shotgun appears in the hands of NYPD officers responding to the hostage situation, with both standard and high-capacity magazine tubes. 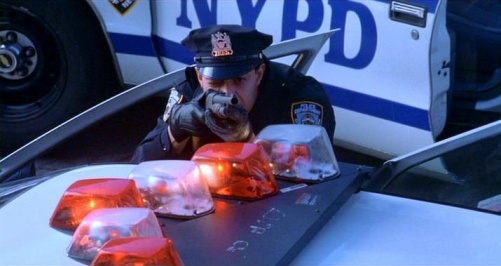 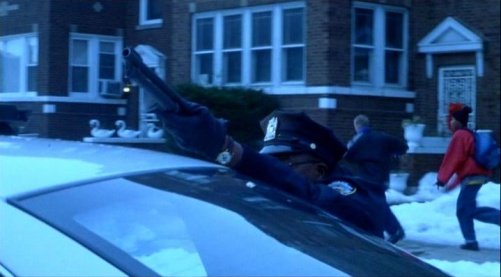 An NYPD officer brandishes an Ithaca 37 with a high-capacity magazine tube.

When Ken Knowles (Judd Nelson)'s class moves to a restaurant after their classroom deteriorates to an intolerable degree, the class is interrupted by a masked robber (Sharif Atkins) brandishing a Mossberg 500 shotgun with wood furniture and a sawed-off stock, though is disarmed when the Mr. Knowles distracts him, recognizing him as a former student of his named Aaron, causing the robber to drop his guard long enough to be hit over the head with a ketchup bottle and knocked unconscious. 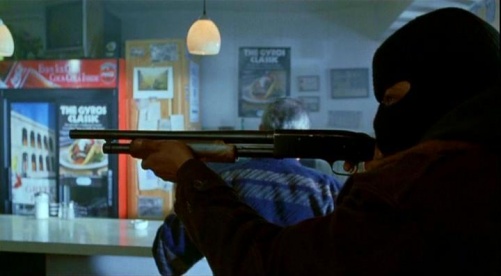 The robber brandishes his Mossberg 500 at the restaurant

some of the NYPD ESU officers responding to the hostage situation can be seen using Remington 700PSS sniper rifles, fitted with Harris bipods, some of them having laser pointers. 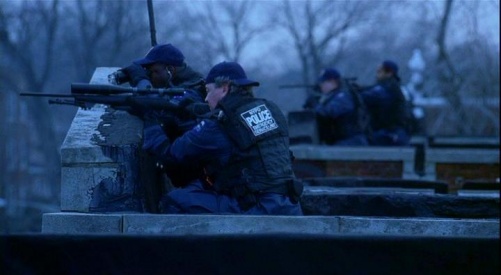 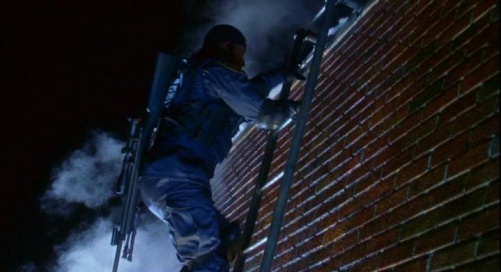 One of the NYPD ESU snipers can briefly be seen with a Valmet M78/83 fitted with a Dragunov-esque stock as well as a scope and laser pointer near the end of the film. The scene is CGI-enhanced stock footage taken from the 1998 film The Negotiator. 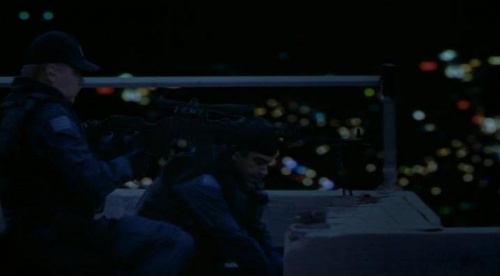 An NYPD sniper sets up his scoped Valmet M78/83. The scene is enhanced stock footage directly taken from the 1998 film The Negotiator.

During the confrontation between the students and the ESU officers, one of the officers (Daren Flam) is seen armed with a Ruger Mini-14 fitted with an aiming laser, firing his weapon at the students, but not scoring any hits. 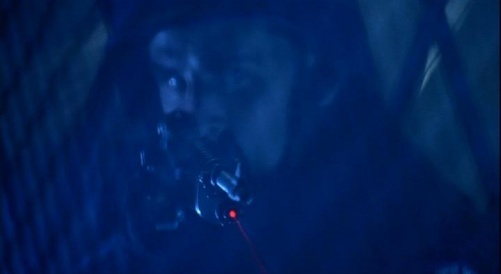 One of the NYPD ESU officers can be seen armed with a Remington 870 folding stock shotgun when SWAT is sweeping the school searching for the students. 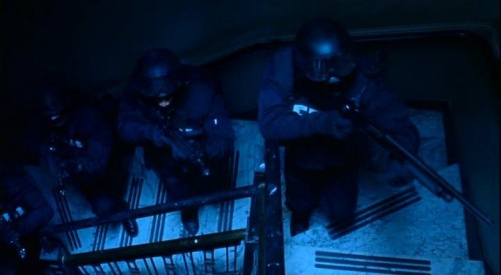