Liev Schreiber holds a Glock 17 as Cotton Weary in Scream 2. 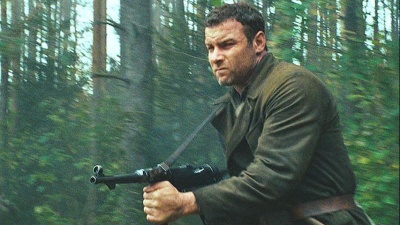 Liev Schreiber fires an MP40 as Zus in Defiance.

Liev Schreiber is an American actor whose film career includes roles in such movies as Defiance, The Sum of All Fears, and Ransom as well as his role as Cotton Weary in three Scream feature films and as Victor Creed/Sabretooth in X-Men Origins: Wolverine. In television, he is well known for his portrayal of the title character in the Showtime series Ray Donovan, a role for which he was nominated three times for the Primetime Emmy for Outstanding Lead Actor in a Drama Series. He also is the half brother of actor Pablo Schreiber.