Let the Bullets Fly is a 2010 Chinese dark comedy/action film co-written and directed by Wen Jiang, who also stars as the main character, with Chow Yun-Fat and You Ge. For a time, it was the highest grossing domestic film in Chinese history before being overtaken in 2012. A sequel is in the works for release in the near future.

In the Warlord Era of 1920s China, bandit leader "Pocky" Zhang assumes the identity of a county governor and takes over running Goose Town. Originally planning to plunder the town of its wealth, he soon finds himself in conflict with a tyrannical crime boss that lords over the region.

The following weapons were used in the film Let the Bullets Fly:

The Mauser C96 is the most common handgun in the film, seen in the hands of almost all the major characters. It is the principle weapon of Pocky Zhang's (Wen Jiang) team, Two (Bing Shao), Three (Fan Liao), Four (John Do), Five (Li Jing), Six (Mo Zhang), and Seven (Xiao Wei) (One is Pocky himself). These pistols may be intended to be the German original, or the Chinese-made Hanyang C96 copy. 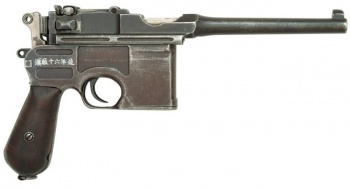 Two and Three with their C96's in a Mexican standoff with Huang's men.

Seven with his pair of C96s.

Pocky Zhang prefers the M1911A1 for his personal sidearm. Note the parkerised finish and markings, showing it's a U.S. Army standard-issue M1911A1.

Four occasionally uses a Smith & Wesson M&P Revolver alongside his C96. Flora (Yun Zhou) holds one to her own head in one scene.

One of the bandits (probably Four) releases their hostages after the ransom has been paid.

Flora holding the M&P to her own head.

An M&P in Four's right hand.

Pocky Zhang and his gang use Lee-Enfield No.1 Mk.III rifles at various points in the film.

Pocky cutting loose the horses from the governor's train.

Pocky doing the same thing later in the film.

Pocky uses a Hanyang 88 Carbine in one scene. It is a back-up for his SMLE prop-wise, as they are meant to be the same rifle.

The Hanyang 88 carbine hanging on the wall behind Pocky.

Note the shape of the bolt handle. Gewehr 88 carbines had spoon-shaped bolt handles.

Three and various background characters are seen using Arisaka Type 38 Carbines. They are stand-ins for earlier rifles, maybe the Type 30, since the Type 38 was not yet present in China at the time.

One of the fake bandits is seen firing a Springfield M1903A1 rifle.

This shot appears to be reversed, as all the bolt handles are on the left.

One of the fake bandits is seen with an unknown Mauser rifle. There isn't enough detail to make a proper ID.

Since these guns appear to be matchlocks, cigarette smoking is even more of a health hazard.

A number of fake prop guns are seen throughout the film.

This prop rifle is supposed to stand in for Pocky's SMLE.