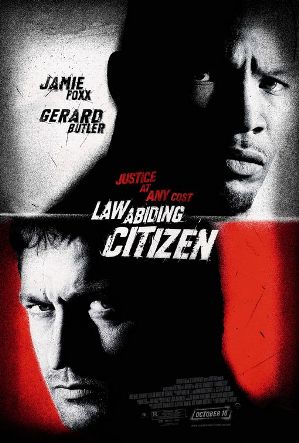 Law Abiding Citizen is a 2009 crime thriller directed by F. Gary Gray and starring Gerard Butler as Clyde Shelton, a father who is pushed over the edge when one of the criminals who killed his family is given a lenient sentence. A decade later, Clyde uses his skills to exact his revenge on those he perceived caused the injustice. Jamie Foxx co-stars as the Philadelphia district attorney who made the lenient deal and now finds himself also the target of Clyde's schemes.

The following weapons were used in the film Law Abiding Citizen:

Nick Rice (Jamie Foxx) is seen armed with a SIG-Sauer P226R when confronting Shelton at the end of the film.

A Philadelphia PD SWAT officer is armed with a Beretta 92FS when going to apprehend Shelton.

A SWAT officer in the background holds his Beretta 92FS.

When alerted to the police raid, Clarence Darby (Christian Stolte) picks up a Harrington & Richardson .22 from underneath a couch cushion to use on the police. The revolver fires nine shots but the film says it only fires six.

Darby picks up a revolver.

A SWAT team member in the foreground holds his MP5A2.

Other SWAT team members as well as FBI HRT members are armed with M4A1 Carbines fitted with tactical flashlights.

An FBI HRT member with his M4A1.

Guards at the prison are seen armed with Remington 870 shotguns.

A guard on the rooftop holds a Remington 870.

One of the contraptions that Shelton uses in his quest to exact vengeance on the justice system is a remotely-operated weapons platform fitted with a Browning M2HB heavy machine gun, which is used to attack the attendees of a funeral. Side note: the sound effects during this scene were not even close to correct. The audio was from a weapon with a much higher rate of fire and a higher pitch. It was more like the M240 than the M2.

The other weapon used in the remotely-operated weapons platform is an M136 AT4 rocket launcher.

Another of Shelton's contraptions is a cell phone gun that fires a single bullet when a call is received.