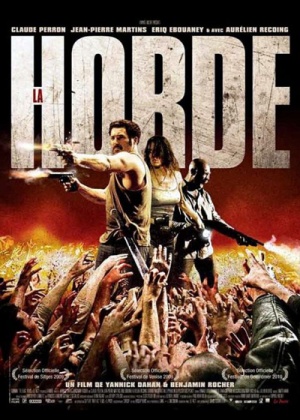 La Horde or The Horde is a 2009 French horror film, directed by Yannick Dahan and Benjamin Rocher, it stars Jean-Pierre Martins (as Ouessem), Eriq Ebouaney (as Adewale Markuni) and Doudou Masta (as Bola Markuni). It tells the story of a group of French police officers attempting to take down a group of drug dealers in retaliation for the killing of a fellow police officer. However, both the police and the drug dealers soon find themselves directly in the middle of a zombie outbreak.

NOTE: Identifying a majority of these weapons was very difficult as the movie was filmed in almost complete darkness, so even the most recognizable weapon was very difficult to identify due to lighting. Also, for various reasons, many characters switch weapons in the course of the film, so that character X's handgun may later be seen in the hands of character Y, etc.

The following weapons were used in the film La Horde:

The police officers initially carry and use the SIG Pro SP2022, which (in 9x19mm) is the standard-issue handgun of the Gendarmerie Nationale, the Police Nationale and various other French law enforcement agencies. The designation "2022" in fact refers to the year until which the French police expects to keep the gun in service. Actual police-issue models have "PROPRIÉTÉ DE L'ÉTAT" ("property of the state") stamped on the right side of the dust cover. Some of the minor drug dealers also carry this weapon.

Seb (Sebastien Peres), a minor drug dealer, is seen wielding an SP2022 in the background.

José Greco (Jo Prestia) with an SP2022, possibly taken from one of the cops.

Various drug dealers carry and use the Beretta 92FS. Some of the cops acquire these pistols from the dealers' stockpile.

The lead dealer, Adewale Markuni (Eriq Ebouaney) jams his 92FS into Detective Ouessem's (Jean-Pierre Martins) neck. It should be noted the placement of the finger on the trigger, though it is hard to tell if the hammer is in the firing position until...

... Detective Jimenez (Aurélien Recoing) falls into the line of sight of the 92FS and here you can see hammer is in the firing position and the finger is on the trigger.

Aurore (Claude Perron) with her 92FS.

The female officer known as Aurore (Claude Perron) takes a Beretta 92FS Inox with masking tape wrapped around the grip from the dealers' stockpile and uses it for the rest of the film.

Aurore with her Inox, note the tape wrapped around the grip.

Adewale realizes Aurore has a gun pointed at his head.

Detective Ouessem (Jean-Pierre Martins) uses a Colt M1911A1 along with a Walther P99 towards the climax. José Greco (Jo Prestia), one of the drug dealers, also carries a nickel-plated model with pearl grips.

Ouessem loads up an M1911A1 taken from The Concierge's closet.

Ouessem is seen using a Walther P99 along with a Colt M1911A1 towards the climax.

Aurore (Claude Perron) finds a MAT-49 in The Concierge's apartment and uses it towards the end of the film.

Aurore loads a magazine into the MAT-49.

Aurore (Claude Perron) with the MAT-49.

Detective Jimenez (Aurélien Recoing) carries a Remington 870 with a pistol grip, side-saddle shell holder, and a rail mounted above the ejection port, which is later briefly picked up by one of the dealers.

Jimenez with the Remington 870.

The man known as "The Concierge" (Alain Figlarz) is seen carrying a Mossberg 590 with wooden furniture, blued finish, and extended magazine tube. He carries the shotgun but never gets a chance to use it.

The Concierge (Alain Figlarz) with his Mossberg 590.

Adewale uses a Mossberg 500 Cruiser for most of the film. 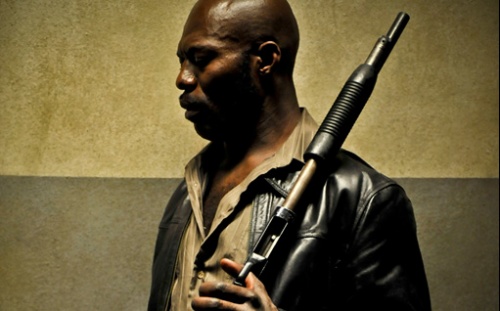 Production still of Eriq Ebouaney with a Mossberg 500 Cruiser.

Adewale with his Mossberg 500 Cruiser.

Adewale pointing his Mossberg 500 Cruiser one-handed, bad idea if it was fired like this.

Tony (Antoine Oppenheim) finds a Double Barreled Shotgun on a corpse, but only uses it once, and then only as a club.

The Double Barreled Shotgun in the hand of a corpse.

Tony with the Double Barreled Shotgun.

René (Yves Pignot), an Indochina War veteran living in the apartment building, finds a belt-fed machine gun in The Concierge's apartment, that is a MAS AA-52 with a barrel (or barrel jacket) taken from a Browning M1919A4.

René finds the machine gun in a closet. 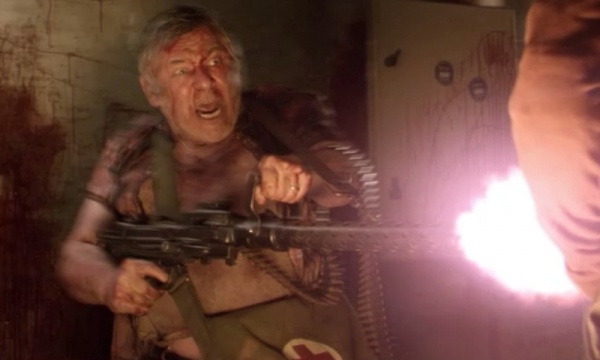 The muzzle flash provides some illumination, revealing the receiver to be that of an AA-52.

Another shot of the weapon.

Another shot of the weapon.

René also uses a Mk 2 hand grenade during the climax.

The pin is pulled and the lever has popped.

The zombie will never know what hit him.
Retrieved from "https://www.imfdb.org/index.php?title=La_Horde&oldid=1364605"
Categories: