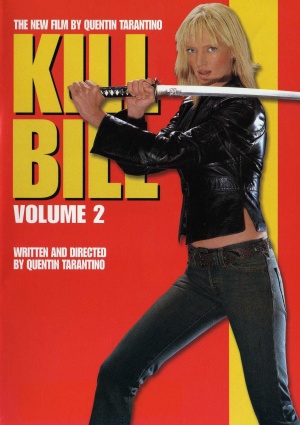 Kill Bill Vol. 2 is the second part of director Quentin Tarantino's "Kill Bill" saga that began with 2003's Kill Bill Vol. 1. Uma Thurman returns as "The Bride" for the 2004 film as she continues to exact revenge on her fellow assassins and her former boss "Bill" (David Carradine), who shot and left her for dead.

The following weapons were used in the film Kill Bill Vol. 2:

The Bride (Uma Thurman) packs a stainless Star Firestar in .45 ACP with a custom extended barrel. 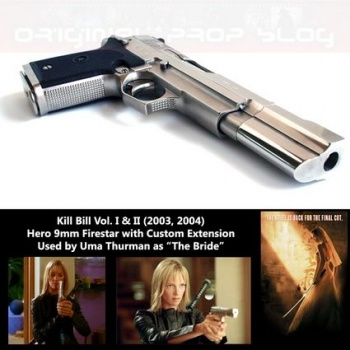 The Bride (Uma Thurman) with her Hatori Hanzo sword slung over her shoulder and Star Firestar at the ready to face Bill.

The Bride with her custom Firestar.

The Bride searches Bill's house, Star Firestar at the ready.

The Bride aims her Firestar at Bill.

In a flashback to when she first discovered that she was pregnant, the Bride aims her Star Firestar at an assassin attacking her. 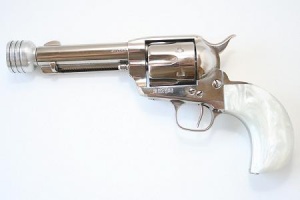 Seen briefly and barely at the wedding massacre scene are M4A1s in the hands of Bill's assassins.

A sawed-off Remington 870 is used by the assassin Karen Kim (Helen Kim) when confronting Beatrix Kiddo in her hotel room.

The assassin readies her Sawed-off Remington 870 to blast a hole in her door.

The assassin Karen Kim (Helen Kim) aims her Remington 870 at The Bride.

Budd (Michael Madsen) packs a 12 Gauge Double Barreled Shotgun, which he loads up with pure rock salt, firing both barrels simultaneously into the Bride's chest.

Budd shoots the Bride with two rounds of 12 gauge loaded with Rock Salt.

Budd pops out the empty shells of his shotgun.

Budd reloads his shotgun. In the script, he turns her over and fires both barrels again at point-blank range into her buttocks, which is even more painful than the first hit.

A Mossberg 500 shotgun is briefly seen in the office of Larry the strip club owner. Note the magazine tube cap, indicating that it's a Mossberg 500.