Kick-Ass 2 is a action comedy film directed by Jeff Wadlow and is the sequel to 2010's Kick-Ass. The sequel finds Dave Lizewski / Kick-Ass (Aaron Taylor-Johnson) becoming allies with other masked superheroes as they encounter a new threat. Returning from the original film are Christopher Mintz-Plasse and Chloë Grace Moretz. This film also includes Jim Carrey, Morris Chestnut, Donald Faison and John Leguizamo.

The following weapons were used in the film Kick-Ass 2: 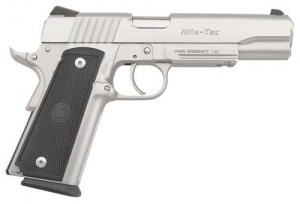 "You're gonna bust your own face when that gun kicks if you don't hold it properly."

The Mother F****r / Chris D' Amico (Christopher Mintz-Plasse) fires both of his Nite-Tac's.

The Mother F***er continues to fire his Nite-Tac's.

Nite-Tac pistols are engraved with the saying "My Way , The Highway".

Mother Russia fires a Glock at a NYPD Police Officer.

An NYPD Officer fires a Glock 17.

Hit Girl fires the Glock 17 at some henchmen.

Mr. Kim looks down the barrel of Colonel Stars and Stripes' Smith & Wesson 5946. Note the decocker/safety-delete, clearly indicating a 5946 variant.

"Yeah, like your head." Mother Russia realizes that the S&W is empty.

Hit Girl / Mindy Macready (Chloë Grace Moretz) uses a SIG-Sauer P230 with purple grips as she tests out a bulletproof vest with Dave. 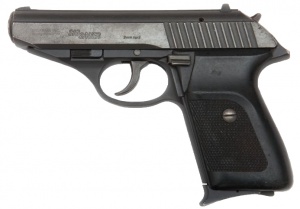 Hit Girl takes a SIG-Sauer P230 out of her bag.

Hit Girl chambers a round in her SIG-Sauer P230. 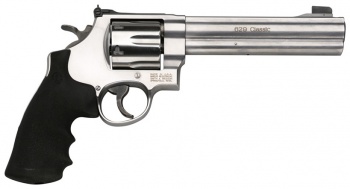 Hit Girl takes a custom Smith & Wesson Model 629 Classic out of her bag.

In a scene from the trailer, Hit Girl loads her Smith & Wesson Model 629.

Several AK-type weapons are seen in the film. 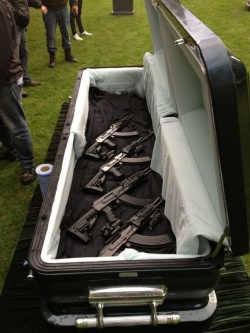 A thug holds a AK.

A thug holds a AK while picking up Kick Ass.

A thug opens fire on Hit Girl with the AK.

A thug holds a AK while searching for Hit Girl.

A NYPD Police Officer holds a Mossberg 500 before he is attacked by Mother Russia.

A NYPD Officer holds a Mossberg 500 while he is attacked by Mother Russia.

The NYPD Officer holds the Mossberg while getting shot by Mother Russia.

A Blaser is seen in the glass case.

A Penn Arms Pump Multi-Launcher is picked up by Genghis Carnage.

What appear to be Benelli shotguns and M4A1 Carbines hanging on the wall to the right.

A M4 is seen next to the picture of Big Daddy and a young Hit Girl.

A Heckler & Koch HK91 is seen behind Kick Ass.

The HK91 is seen to the left of Kick Ass.

A Heckler & Koch MP5KA4 is seen next to Hit Girl.
Retrieved from "https://www.imfdb.org/index.php?title=Kick-Ass_2&oldid=1406782"
Categories: