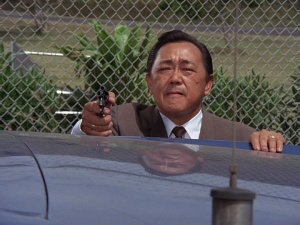 Kam Fong (born Kam Fong Chun) was a Chinese-American actor best known for his role as Chin Ho Kelly in the original Hawaii Five-O. Prior to his role, Fong spent 16 years as a police officer with the Honolulu Police Department. His son Dennis Chun appears as Sgt. Duke Lukela in the television series revival.