The Juror is a 1996 thriller directed by Brian Gibson and based the novel of the same name by George Dawes Green. Demi Moore stars in the film as Annie Laird, a single mother who is selected for the jury in the Mafia boss Boffano trial and then finds herself being pressured by outside forces to find the boss not guilty. The cast included Anne Heche as Annie's best friend Juliet and Alec Baldwin as Mark Cordell, a mafia hitman who calls himself the 'Teacher'.

The following weapons were used in the film The Juror:

WARNING! Several images seen below give away spoilers for several major plot points in the film but are necessary to show the weapon used!

Ruger Mk II pistol with professional Ciener Suppressor - .22 LR. This is a classic Silenced Pistol and this pistol has been seen in several motion pictures

Closeup of the Ruger. 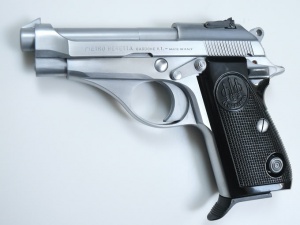 Juliet (Anne Heche) is threatened with the pistol.

The rounded trigger guard of the Beretta Model 70 Inox is visible as 'Teacher' holds the pistol on Juliet.

One of Boffano´s bodyguards holds a Beretta 92FS during a firefight with 'Teacher'.

One of Boffano´s bodyguards holds a Beretta 92FS during a firefight with 'Teacher'.

'Teacher' (Alec Baldwin) carries a Colt M1911A1 pistol when chasing Annie´s son Oliver in the Mayan temple. Annie (Demi Moore) picks up his M1911A1 after he is disarmed. 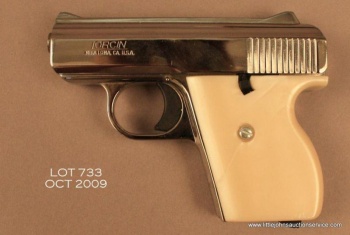 One of the shooters in the Mayan temple uses a Winchester Model 1866 "Yellow Boy".

Another shooter in the Mayan temple is armed with a short barreled Side by Side Shotgun.