Journey's End is a 2018 British war drama directed by Saul Dibb based on the play of the same name by R. C. Sherriff. In a dugout in Aisne in 1918, in the lead up to the famous German Spring Offensive, Second Lieutenant Raleigh, a replacement officer, is assigned to the company commanded by former school-friend Captain Stanhope, only to discover several years in the trenches has turned Stanhope into a bitter, self-loathing alcoholic. This is the fifth film adaptation of the novel. In the first adaptation Capt. Stanhope was portrayed by Colin Clive.

The following weapons were used in the film Journey's End:

The Webley Mk VI is used by the Company officers.

Osborne and Raleigh prepare their revolvers before going on a trench raid.

Osborne climbs over the sap.

Raleigh crawls with his Webley over no man's land.

Osborne prepares to give the order to rush the trench.

Raleigh holds his revolver whilst awaiting the German attack.

Captain Stanhope holds his revolver on Second Lieutenant Trotter during a heated argument. 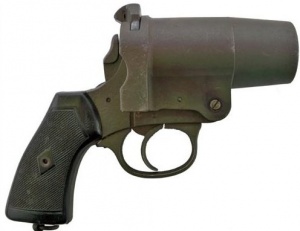 British soldiers use Lee-Enfield No.1 Mk.III* rifles, with and without bayonets.

British soldiers marching with their SMLEs.

The Company Sergeant Major (Andy Gathergood) and other British soldiers with rifles slung.

A British soldier climbs the sap.

A British soldier in no man's land with an SMLE.

A British soldier with bayonet fixed awaits the German attack.

A German soldier can be seen with an anachronistic VZ-98/22 Czech Mauser with flat tangent sight, standing for a correct Mauser Gewehr 1898.

A German soldier is shot whilst holding a Czech Mauser.

A German soldier with a Mauser 98AZ Artillery Carbine.

A German soldier with a Carbine silhouetted in the sun.

British soldiers carry the Lewis Gun, which can also be seen mounted in the trenches.

A British soldier marching with the Lewis.

A Lewis gun mounted in a trench.

German soldiers are seen with what appears to be a smooth-barreled Maxim M1910, standing in for the more likely MG08, although not strictly anachronistic, as it could have been captured from the Eastern Front. 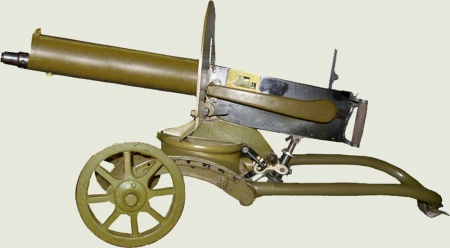 The muzzle of the Maxim.

A German soldier can be seen with an anachronistic Model 24 Stielhandgranate standing for a correct Model 17.

The Stielhandgranate on his belt.
Retrieved from "https://www.imfdb.org/index.php?title=Journey%27s_End_(2018)&oldid=1411625"
Categories: