Iron Sky is a 2012 Finnish/German/Australian science fiction comedy directed by Timo Vuorensola starring Julia Dietze, Christopher Kirby, Götz Otto, Udo Kier, and Peta Sergeant. The film is the first "real" film by Vuorensola, who had previously made Star Wreck: In the Pirkinning with a few friends. Ten percent of the film's funding was crowdsourced from fans, with the rest provided by traditional sources. It spawned a sequel, 2019's Iron Sky: The Coming Race

The following weapons were used in the film Iron Sky:

Klaus Adler (Götz Otto) shoots the first astronaut after he stumbles upon the Nazi moonbase.

Adler with his P38 when confronting James Washington (Christopher Kirby).

A behind-the-scenes featurrette showed the filming of the scene above. Surprising, a real blank-firing P38 was used rather than CGI. 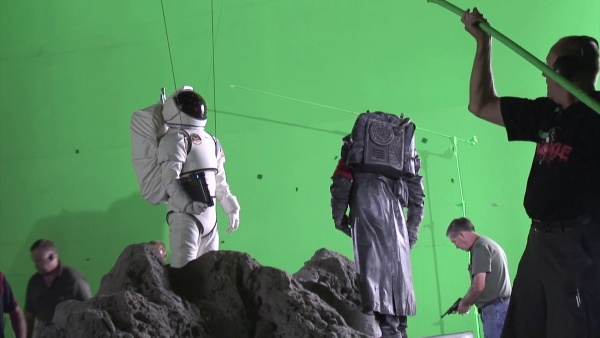 The armorer loads the P38 before handing it to the actor. 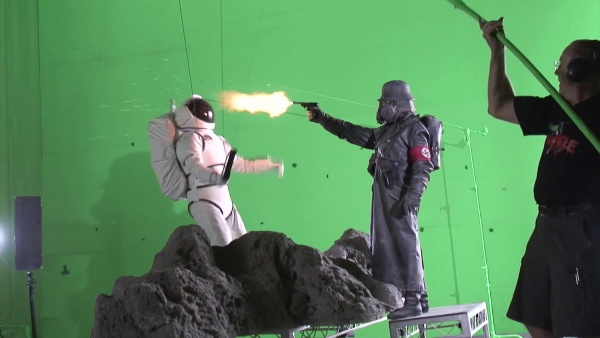 Renate Richter (Julia Dietze) uses a Walther PP at the end of the film. Klaus later takes it from her.

Renate aims her PP at Adler.

Adler with the PP.

Another one of the urban youths draws a snub-nosed Smith & Wesson Model 19.

Another one of the urban youths draws what appears to be a Heckler & Koch USP.

One of the other urban youths draws what looks like a Heckler & Koch USP Match.

As the film was partially crowd-funded, the promos were needed to bring in donations.

A farmer (uncredited) opens fire on the moon Nazis with a Double Barreled Shotgun when they land on her property.

Many of the moon Nazis use modified MP38 submachine guns.

"Moon Fuhrer" Kortzfleisch has his troops stand down. (Those are moon Nazis, and not just some really dedicated cosplayers).

Kortzfleisch with his guards after landing on Earth.

A closeup of the muzzle on one of the modified MP38s. 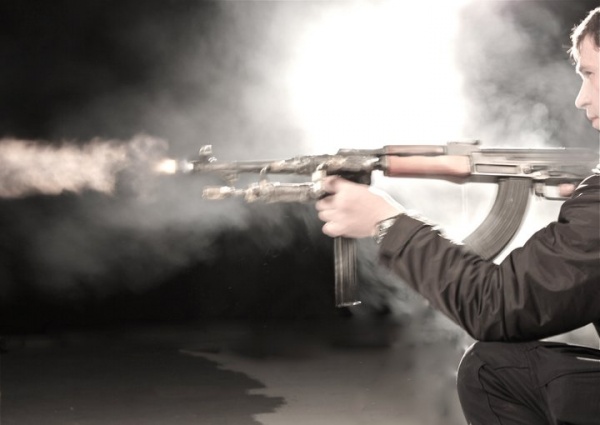 Bizarrely, due to the reliability issues and other considerations, the previous close-up shot was actually made by firing an AK-47 with the barrel of a prop MP38 welded on.

The costumes seem to have been settled, but not the weapon embellishments.

Many of the moon Nazis are seen with modified Sturmgewehr 44s.

Many of the moon Nazis are seen with modified AKMS rifles.

The gas tubes appear to have been removed from their AKMS's. 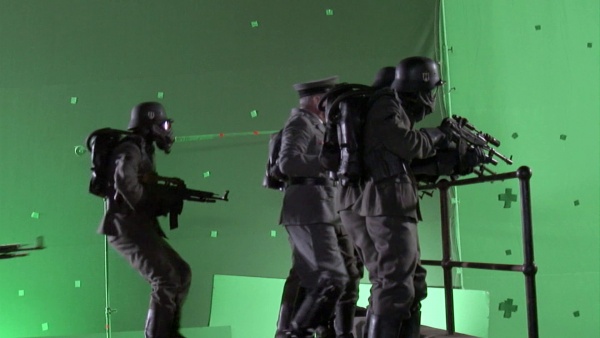 An alternate take of one of the scenes above. In the final cut, MP38s are used. Note the guards with the modified StG 44s.

General Electric GAU-8/A Avengers are seen in the noses of Air Force A-10s as they counterattack against the moon Nazis. 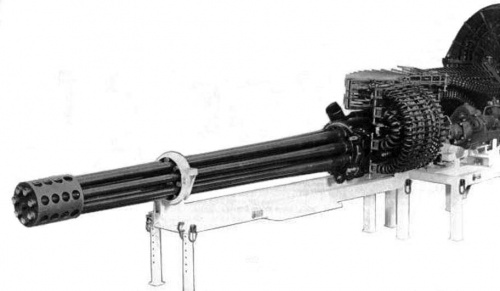 Moon Nazi saucers are equipped with some sort of defensive armament. They use it defend themselves against the US counterattack.

A saucer opens fire on an attacking F-22.

The moon Nazis blow up Washington's lunar lander with what appears to be an update on the Panzerschreck.

The President of the United States (a parody of former Alaska governor and vice presidential candidate Sarah Palin) has a gun rack with several rifles in the White House, but they cannot be identified.

The gun rack in the background as the president speaks to Vivian via some sort of holographic interface.

Check out that rack... in the background.
Retrieved from "https://www.imfdb.org/index.php?title=Iron_Sky&oldid=1419355"
Categories: