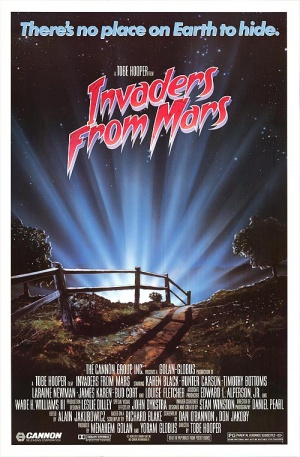 Invaders from Mars is the 1986 remake of the classic 1953 film of the same name. The film was directed by Tobe Hooper.

The following weapons were used in the film Invaders from Mars:

Chief Ward (Jimmy Hunt) and Officer Kenney (Kenneth Kimmins) carry Colt Python revolvers as their sidearms. They're seen holstered in several scenes, but only taken out when the two confront David and Linda in the school.

Kenney and Ward point their Colt Python revolvers at David and Linda.

NASA technicians Hollis and Johnson point their M1911A1's at General Wilson after being discovered as Martian zombies.

Sideview of the technician's pistol.

General G. Climet Wilson (James Karen) with his M1911A1 sidearm after the technicians have been disarmed.

The M16 rifles used by the US Marines in the film are M16 (SP1) models with M16A1-style "birdcage" flash hiders.

A Marine MP fires his M16 at a speeding truck commandeered by two Martian-controlled NASA technicians. The "slab side" receiver indicates that this is a SP1.

The M60 is also one of the weapons carried by the Marines in the film.

A Browning M2HB is seen mounted on Marine jeeps.

The M2 mounted on a Marine jeep.

U.S. Marine Corps LAV-25s in the film are fitted with the M242 Bushmaster chaingun.

Trivia: The U.S. Marine Corps supported the production with equipment and Marine Reservists acting as extras. Thus, the LAV-25s in this movie are actual LAV-25s. Along with Heartbreak Ridge, another movie which received USMC support, Invaders from Mars is one of the first films to feature the LAV-25.

The Marine Squad Leader (Dale Dye) is seen using an M47 Dragon against the Martians. This is one of the earliest appearances of the weapon in a feature film or television series.

The Marine Squad Leader (Dale Dye) yells "Fire in the Hole!" before using the M47 Dragon.

An Mk 153 SMAW is used by a Marine to kill several Martians. The use of the SMAW in this film is notable, as the launcher had only just entered service with the U.S. Marine Corps in 1984, just two years before this film was released. This movie is likely the first-ever cinema appearance of the SMAW.

A Marine fires the SMAW.

The second Marine from the foreground carries the M16 rifle fitted with an M203 launcher.

The M72 LAW is seen carried by some of the Marines in the film.

A Marine on the right carries the LAW slung over his shoulder.
Retrieved from "https://www.imfdb.org/index.php?title=Invaders_from_Mars_(1986)&oldid=1451202"
Categories: