The following weapons were used in the film The Hunger Games: Mockingjay - Part 1:

Peacekeepers can be seen with their standard-issue FN F2000 Tactical assault rifles with white furniture.

Peacekeepers open fire with their F2000s and Tavors. 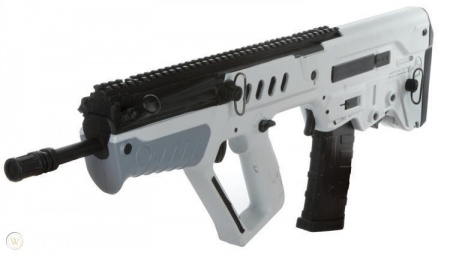 Peacekeepers open fire with their Tavors and F2000s.

An M14 is also seen being wielded by a rebel child soldier in District Eight.

Rebel child soldier in District Eight armed with an M14

A District 13 commando team uses G36C-mounted M203 grenade launchers to fire knockout gas during a hostage rescue in the climax.

Rebels fire what appears to be a Browning M2 heavy machine gun at attacking hovercraft during the air raid on the District Eight hospital.

A twin-mount machine gun is briefly seen during the District Eight air raid. It appears to be an MG34 or MG42.