The following weapons were used in the film Home Sweet Home (2013):

The Killer (Shaun Benson) briefly uses a M1911A1 at the one point.

The Killer (Shaun Benson) pulls a Beretta 92FS at the film's climax and fires it two times.

The Killer aims his Beretta...

A view of the other side of the Beretta.

The Beretta is aimed...

Sara (Meghan Heffern) owns a Kimar Competitive, which she uses during the second part of the movie, most notable during the sword vs. gun fight with the Killer. 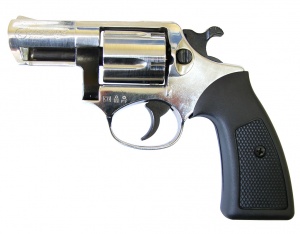 A close-up view of Kimar in Sara's hand. It is initially rendered useless by a trigger lock.

Sara prepares to unlock the Kimar.

Another view of the Kimar, when Sara struggles with the Killer.

...but is disarmed (quite literally) by a yari slice. This is the only shot when the revolver's grip can be seen.

A Sawn-off Double Barreled Shotgun is the Killer's backup firearm.

The Killer inspects his shotgun.

The Killer waits in ambush, shotgun in hand.

The sawn-off buttstock is seen.
Retrieved from "https://www.imfdb.org/index.php?title=Home_Sweet_Home_(2013)&oldid=1393705"
Categories: