Hit Back (Otvetnyy khod) is a 1981 Russian action movie by Mikhail Tumanishvili. It is a sequel to In the Zone of Special Attention (V zone osobogo vnimaniya). The movie shows the reconnaissance group of Soviet Army paratroopers and marines during military exercise.

The following weapons are seen in the movie Hit Back (Otvetnyy khod):

The Makarov PM is the issue sidearm of Soviet Army officers and warrant officers including Lieutenant-Colonel Morozhkyn (Anatoli Kuznetsov). Most of the PMs are seen holstered.

PM in hand of Warrant Officer (of the "enemy" side of military exercise) who is trying to take Captain Tarassov as a prisoner.

In the opening scene marines are seen training with AKMS assault rifles. They are mostly AKMS of first model that lacks slant compensator on the tip of the barrel and some of them are loaded with bakelite plastic magazine.

Marine Sergeant Zinovieva (Yelena Glebova) with AKMS with bayonet among marines during the training. This AKMS is of second model with slant compensator on the tip of the barrel.

Marines with AKMS during the bayonet fighting training.

A bakelite magazine and the muzzle without compensator are seen.

The special reconnaissance group members are armed with 7.62mm AKS-47 of first model (instead of 5.45mm AKS-74 as in the previous movie).

Captain Tarassov and Warrant Officer Volentir with AKS. Note the 6-Kh-4 bayonet for AKMs that cannot be fitted to older AK/AKS-47.

Soldiers with AK-74s are combing the countryside in search of the reconnaissance group.

A radioman with AK-74 is seen at the background.

RPK light machine gun is seen during the scene on the airfield.

A muzzle and folded bipod of RPK is seen.

A four-barrel YakB-12,7 machine gun is mounted on Mi-24 helicopter. 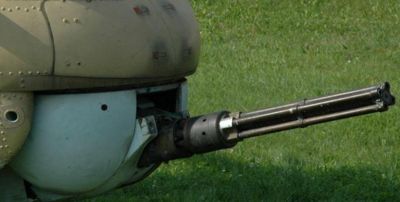 12-inch triple turrets of the coastal artillery. It's a unique battery positioned on the Black Sea coast.
Retrieved from "https://www.imfdb.org/index.php?title=Hit_Back_(Otvetnyy_khod)&oldid=1384608"
Categories: