Hell on Frisco Bay is an American 1955 film noir directed by Frank Tuttle and stars Alan Ladd as Steve Rollins, a former police officer who was unjustly convicted of manslaughter and returns to San Francisco after five years in prison. Now he makes his own investigation of the case in order to find who framed him.

The following weapons were used in the film Hell on Frisco Bay:

Joe raises his revolver on Steve Rollins when the latter confronts Amato.

A good view of Joe's revolver.

Joe holds Amato at gunpoint after he finds out that his boss sent a hitman for Joe's head. 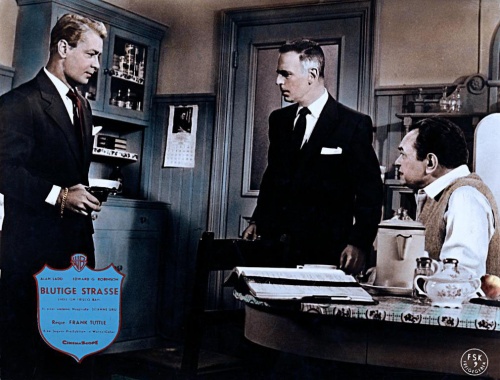 Hammy fires at Rollins from the car.

Hammy is shot by Dan Bianco.

When Hammy fires at Steve Rollins, Dan Bianco (William Demarest) fires back at Hammy and mortally wounds him. His revolver is seen only partially; Smith & Wesson Military & Police seems to be best guess.

Steve Rollins holds a full-size revolver of unclear model on a promotional image. He doesn't use such gun in the film. 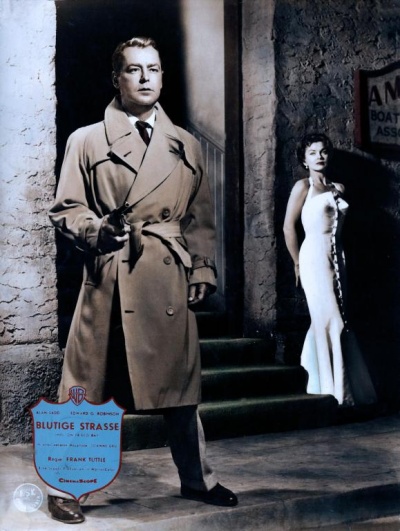 Victor Amato (Edward G. Robinson) uses an M1911 in several scenes. Original movie poster show Steve Rollins holdind an M1911 but this character doesn't use this gun in the film.

Amato readies his pistol when he leaves the office.

Amato takes the gun. Note the flat mainspring housing on the grip that allows to differ the pistol from M1911A1.

Amato fires at Joe Lye who tried to stop his treacherous boss.

When Amato leaves the office, his pistol switches to a different version of M1911 family. This pistol has different rear sights, larger ejection port (like M1911A1) and deep blue finish. Possibly it's an M1911A1 but it's hard to say for sure.