This page is intended as a guide to identify the various H&K manufactured MP5 variants. This list contains all firearms that could be confused for an MP5 by the average person. Some of these firearms are not true MP5's, but bear strong resemblances to them. If there is not an "MP5" in the official model name, it is not a true MP5. The preferred term for identification is highlighted in bold.

The glossary contains some accessories that will not be found on stock MP5's, but are likely to be seen in movies or TV shows.

The traditional MP5 barrel. Comes standard on all true MP5's. Identified by short length and the three lugs around the base. These lugs are used to quickly attach/detach suppressors.

A shorter version of the civilian barrel. This does NOT come standard on any MP5. Instead, armorers chop the barrel down to the length of the 3-Lug to resemble an MP5. Identified by short length and lack of lugs.

A barrel flush to the end of the weapon. These come standard on all MP5K's (aside from the MP5KN and MP5K-PDW), and rarely appear on full-size MP5's. Theoretically, an armorer could chop the barrel of a full-size MP5 to make it flush, but this is unlikely.

This barrel has an integral suppressor, which is built into the SD Forearm. This barrel comes standard on all SD variants, but there are non-suppressing SD Forearms to simulate the SD without actually suppressing the weapon.

A full-length barrel compliant with federal law for civilian use. This is standard on the HK94, but some armorers chop the barrel down to simulate a true MP5.

The earliest version of the MP5 forearm which can easily be identified by its textured surface and slim profile. This forearm was used on the original production MP5A2, but can be fitted onto any MP5.

The second forearm to be produced with the MP5. This is identified by its smooth polymer surface and larger profile. This is the current forearm on most MP5's. 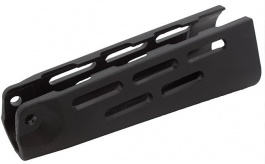 A forearm incorporating a tactical light. These are produced by many third-party companies, and can be fitted to any standard length MP5.

This is a forearm with integrated rails. These are also manufactured by many third-party companies, and can be fitted to any standard length MP5. 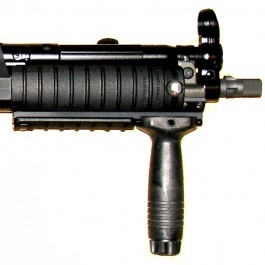 This is a foregrip with an integrated suppressor (German Schalldämpfer, hence the "SD" label) used only on the MP5SD variants. There are non-suppressing replicas of these availiable for those who want an SD look without the actual suppressing function.

The vertical grip used only on MP5K's. Due to the shorter barrel of the MP5K, this can only be fitted onto a standard length MP5 with an adaptor.

This forearm comes standard with SP89's. Similar to the MP5K, but without a foregrip and an extended shroud. 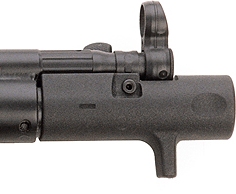 Comes standard on all semi-auto MP5's. The 0-1 is identified by the numbering, as well as the lack of a paddle magazine release.

Used on the original MP5's, and still comes standard on most. Identified by an S-E-F pattern (the initials of safe, semi-automatic, and full automatic in German), indentations around the safety lever, and finger grooves on the grip.

A trigger group made for the Navy, incorporating an easier switch to actuate, new grip, universal pictures to represent the firing modes, and a reversed order from the SEF.

A Navy trigger group, with an added 2 round burst setting after semi-automatic.

Identical to the Navy 2 Round Burst, but with a 3 round burst setting instead of two. 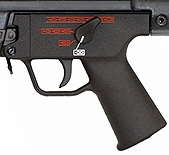 All stocks (or end caps) are compatible with every MP5 variant.

A solid, fixed, stock that is used on the A2 and A4 variants. This stock is made of polymer. 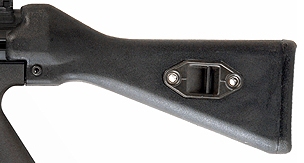 An extending stock used on A3 and A5 variants. The extending stock is made of metal with a polymer buttplate. While the MP5K was never offered by H&K with an extending stock, it's not uncommon to see an MP5K in what's called a "reverse stretch" configuration, which is a hybrid upper of an MP5 and MP5K, designed so that while it is the length of the MP5K forwards, it extends about an inch further back, and as such can be used with the A3/A5 extending stocks. These hybrid uppers were popular in the '80s where they were made by American companies such as Dakota Tactical. Hypothetically, a reverse stretched MP5K could also be used with an A2/A4 fixed stock, but that kind of negates the point of having a short barrel in the first place, and doesn't seem to be something anyone actually sells. 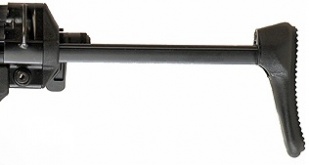 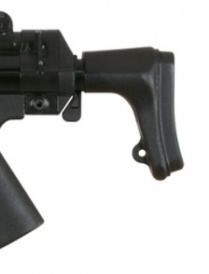 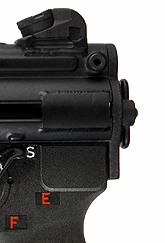 The MP5K-PDW introduced a new folding stock. This is made of polymer, and can be fitted on any MP5. 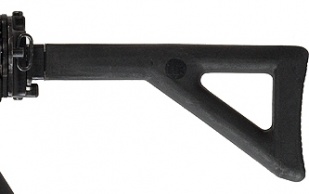 The side-folding stock of the UMP can be fitted on any MP5 variant. 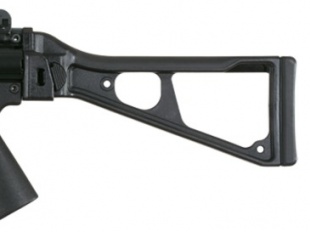 Used on all military MP5s and nearly identical to the release on the G3 rifle and its derivatives. Pushed forward.

Used on many semi-automatic and other caliber variants instead of a paddle release. If there is no paddle release, it is not a true MP5.

The very first magazine that came with the MP5. These are identified by the indentions on the front of the magazine. These were for 9x19mm, unlike the straight mags used for the MP5/10 and MP5/40, but didn't work well with certain rounds, so the switch was made to more universally reliable curved mags for 9x19mm.