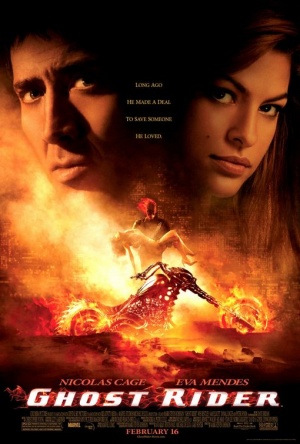 Ghost Rider is the 2007 feature film adaptation of the Marvel Comic book series and was directed by Mark Steven Johnson (Daredevil). Nicolas Cage stars as Johnny Blaze. Cage would return in the 2012 sequel in Ghost Rider: Spirit of Vengeance.

The following weapons were used in the film Ghost Rider:

The police officers and detectives in the film all use Beretta 92FS Inoxs as their sidearms. This weapon is most notably seen when the police are firing at Johnny Blaze A.K.A Ghost Rider (Nicolas Cage).

Several of the police officers who arrest Johnny Blaze (Nicolas Cage) can be seen with Remington 870s fitted with folding stocks, and flashlight attachments on the foregrips.

Several of the police officers that arrest Johnny Blaze are armed with Remington 870s.

The SWAT officers that shoot at Johnny Blaze A.K.A Ghost Rider (Nicolas Cage) are armed with M4A1 carbines.

Before going to San Venganza, Carter Slade A.K.A The Caretaker (Sam Elliott) gives Johnny Blaze A.K.A Ghost Rider (Nicolas Cage) a Winchester Model 1887 shotgun similar to the one used by (Arnold Schwarzenegger) in Terminator 2: Judgment Day, in which he uses to battle Blackheart (Wes Bentley). One cool scene with this weapon is when Johnny sticks the shotgun in the darkness, and turns it into the Hellfire Shotgun (the weapon's name in the comic book) making it much more powerful, and then proceeds to blow Blackheart apart with a single blast.

The Winchester Model 1887 transforms into the Hellfire Shotgun.
Retrieved from "https://www.imfdb.org/index.php?title=Ghost_Rider&oldid=1406771"
Categories: