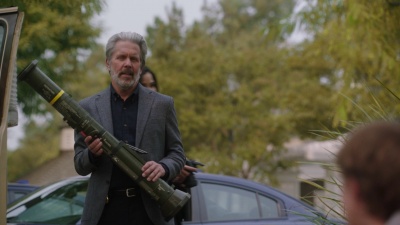 Gary Cole holds an AT-4 launcher as SSA Alden Parker in NCIS.

Gary Cole is an American actor who has had diverse roles in such feature films as One Hour Photo, Pineapple Express, Office Space and The Brady Bunch Movie and such television series as The West Wing, Midnight Caller, From the Earth to the Moon and Miami Vice. In addition, Cole also voiced the title character in the animated series Harvey Birdman, Attorney at Law and the City Inspector in the series Love, Death & Robots as well as taking on the role of Supervisory Special Agent Alden Parker in the 19th season of the CBS series NCIS.