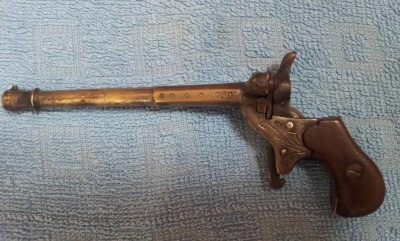 The Flobert gun was created by French inventor Louis Nicolas Flobert in 1845. Flobert's cartridge contained a percussion cap and small lead bullet, but no propellant charge, so the bullet was thrown only by the energy of the percussion cap. Such cartridges could be used only for recreational indoor shooting. Flobert rifles and pistols were popular until the early 20th century. A trademark Monte Сristo is often used when speaking about Flobert guns.

The Flobert Gun and variants can be seen in the following films, television series, video games, and anime used by the following actors: