Figures in a Landscape

The following firearms were used in the 1971 Mystery-Thriller film Figures in a Landscape: 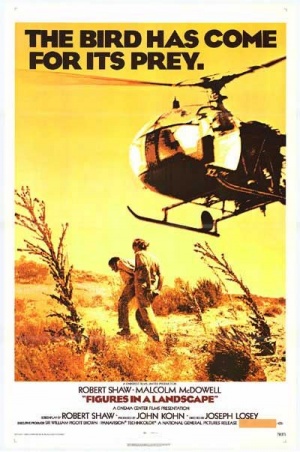 Figures in a Landscape (1971) Directed by Joseph Losey

Both MacConnachie (Robert Shaw) and Ansell (Malcolm McDowell) use a Winchester Model 1892 Rifle throughout the film which they took from the Widow's (Pamela Brown) house while passing through the village. It is used many times, most notably by MacConnachie to shoot the helicopter observer (Christopher Malcolm), until it is lost by Ansell while fighting the soldiers in the farming fields.

Winchester on the gun rack before MacConnachie takes it

View down the sites of the Winchester as MacConnachie fires at the helicopter. It appears to be empty for safety reasons as there is no smoke when he fires it

Another weapon used in the film is the Star Z45, which is taken from the dead helicopter observer by MacConnachie and used by him for the rest of the film. Soldiers searching for MacConnachie & Ansell also use this weapon.

MacConnachie fires at the approaching helicopter

Ansell picks up a Mauser Gewehr 1898 Sporter 7 while he and MacConnachie sneak into the military headquarters.

Ansell with the Gewehr 1898

Many of the soldiers use unidentified rifles throughout the film while searching for MacConnachie and Ansell.