Erased is a 2012 espionage thriller starring Aaron Eckhart as Ben Logan, a CIA agent who is forced to go on the run with his daughter Amy (Liana Liberato) when all records of his past are erased and they are marked for death as part of a larger conspiracy.

The following weapons were used in the film Erased:

A hitman clears out a CIA vault at the beginning using a Micro Uzi.

The hitman clears the CIA vault.

The hitman fires a burst with the Micro Uzi.

Floyd (Alexander Fehling) uses a SIG-Sauer P230 when he takes Ben Logan and his daughter hostage. Floyd and Logan struggle over the gun after a car crash. Anna Brandt (Olga Kurylenko) also carries a SIG-Sauer P230.

Floyd holds the SIG-Sauer P230 on Logan as he drives.

The SIG hits the floor as they struggle during the car crash.

Logan picked up this gun.

Anna flashes her gun at Logan on a train.

Walter (Nick Alachiotis) uses a suppressed Beretta 92FS Inox when he goes to the hospital to find Ben Logan (Aaron Eckhart) and his daughter. Logan disarms him and uses the Beretta for the rest of the film.

Walter kills a witness with his suppressed Beretta 92 Inox.

Derek Kohler (Neil Napier) pulls out a Kimber Custom TLE II when he suspects someone is in his hotel room. Ben Logan (Aaron Eckhart) takes it from him but leaves it behind when he exits the hotel room. 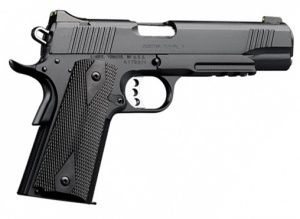 A Belgian police officer in hospital holds a Glock in his hand.

CIA hitmen fire at Logan and Amy as they drive away. 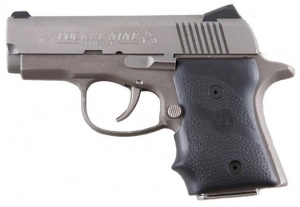