Double Trouble is an American 1967 musical crime comedy directed by Norman Taurog and starring Elvis Presley as Guy Lambert, an American singer who crosses paths with criminals during his tour in Europe.

The following weapons were used in the film Double Trouble:

Morley aims at Guy and Jill when they leave a hotel.

Adventuress Claire Dunham (Yvonne Romain) carries a hammerless pocket pistol with pearl grips. It is supposed to be a Belgian Melior New Model in 6.35mm caliber. 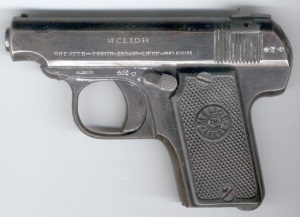 The pistol is seen during the grapple.

Guy Lambert snatches the gun out of Claire's hand.

Belgian police carry pistols in holsters. Only small parts of grips can be seen, and what is seen allow to make a vague guess that these pistols (or at least some of them) are M1911A1s.

A police officer at the background carries a holster on his belt. The shape of the holster resemble US Army M1916 for M1911/M1911A1 pistol.

A police officer at the left carries a holstered pistol; a small portion of the grip is seen.

A pistol is seen in open holster.

A toy revolver, copying SAA Cavalry Model, is seen in hands of an eccentric passer-by (uncredited) on the streets of Antwerp.

A man aims at Jill Conway and Guy Lambert who just arrived in the city.

The gun appears to be a toy.
Retrieved from "https://www.imfdb.org/index.php?title=Double_Trouble&oldid=1296123"
Categories: