The following weapons were used in the film Dobermann: 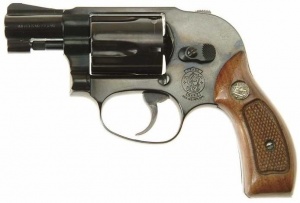 Aiming at the policemen.

The Policemen are equipped with Smith & Wesson Model 13s. 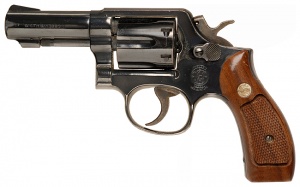 A Policeman with his sidearm.

A Police officer with his sidearm.

Seen at the beginning of the film, the Smith & Wesson 629 is given as a christening gift to the infant Dobermann.

The Smith & Wesson in his box.

Yann Lepentrec "Dobermann" (Vincent Cassel) uses a Smith & Wesson Performance Center Model 629 as his sidearm throughout the movie. The barrel shroud is used as a rocket launcher.

The Revolver is loaded with one of the mini rockets.

"Dobermann" is ready to shoot.

Jean-Claude Ayache "Moustique" (Antoine Basler) uses a Colt Anaconda with an 8" inch barrel and pearl grips in the beginning and the bank robbery.

"Moustique" with his Colt Anaconda

One of the policemen in the club has a Glock 17. 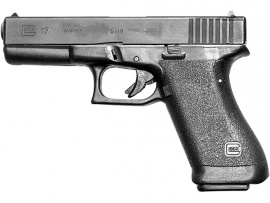 The Policeman aiming with his Glock.

The Commissaire Christini (Tchéky Karyo) uses a Jericho 941 R as his sidearm. 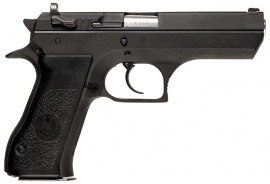 Christini (Tchéky Karyo) fires his Jericho 941 R at Dobermann, who is hidden in a car. 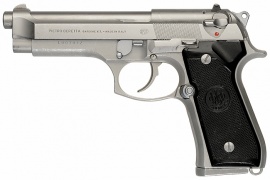 The Beretta 92FS Inox a moment before Moustique (Antoine Basler) grabs it.

A Beretta 93R is used by one member of the French SWAT in the nightclub shootout. 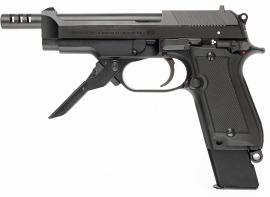 The SWAT members shooting between their shields.

Used by Manu (Romain Duris), one of the member of Dobermann's gang,has a nickel finished Desert Eagle with a black 14" barrel.

The Priest Frossard (Dominique Bettenfeld) carries a Double Barrel Shotgun during the shootout.

Note the white cross on the stock.

The Mossberg 590 Compact Cruiser is seen in the hands of Nat the Gypsy (Monica Bellucci) when she and Dobermann rob an armoured car at the beginning of the film. Nat is also seen seductively licking the shotgun's barrel and muzzle with her tongue during the armoured car heist.

The gang has a Mini Uzi, which they use several times during the film.

MiniUZI that malfunctions while escaping after the bank robbery

A Beretta M12 is used by members of the French SWAT (RAID) in the nightclub shootout. 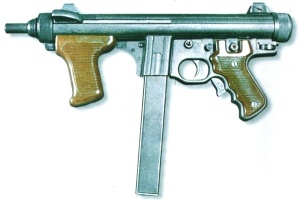 Nat the Gypsy (Monica Bellucci) uses the fake grenade launcher to open a bank door. In addition to the grenade launcher, Nat's Minimi also had a large 1980s laser sight mounted on top of the Minimi's barrel.

Note the handguard from the grenade launcher.

Nat (Monica Bellucci) prepares to fire the M203 through the door of the bank.

Nat loads the M203 with a big rocket.

Nat is ready to fire the rocket.

Used by Commissaire Christini (Tchéky Karyo) and French SWAT in the nightclub shootout with a folding stock and three mags jungle-taped . 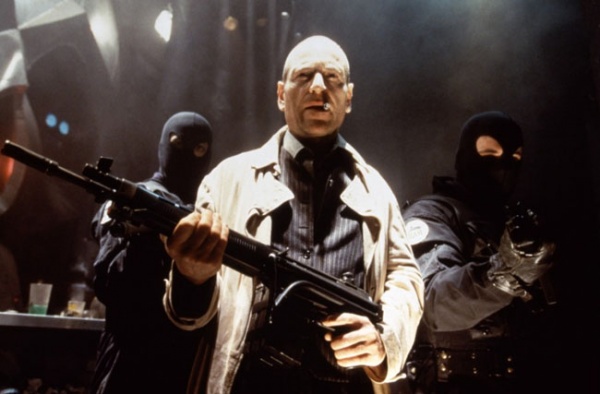 Manu use a Walther WA 2000 in the bank robbery to kill an inspector.

Used by Nat The Gypsy (Monica Bellucci) during the night club shootout.

The Priest Frossard uses a F-1 hand grenade to blow up a biker.

The Priest has a hand grenade in his Bible

The Priest puts his hand grenade on the biker helmet

The biker loses his head on the powerful grenade explosion
Retrieved from "https://www.imfdb.org/index.php?title=Dobermann&oldid=1289974"
Categories: