Colonia, also known as The Colony, is a 2015 movie directed by Florian Gallenberger (John Rabe). In the midst of the Chilean military coup of 1973, Lena and her boyfriend Daniel are arrested by Augusto Pinochet's secret police. While Lena is allowed to run again after a short time, Daniel is taken to the isolated Colonia Dignidad camp in the south of the country. Lena follows him and joins the sect to free him.

The following weapons were used in the film Colonia:

A Chilean soldier is seen with an unknown pistol to execute a Union leader. Possibly from the Argentine Armory like most weapons in the movie.

The Pistol on the right.

Some Chilean troops are armed with M3A1 "Grease Gun"s.

The soldier on the left holds a "Grease Gun" while Daniel (Daniel Brühl) is surrounded.

Two soldiers arrest Daniel, the right one carries an M3A1.

The SMG on the left when Lena (Emma Watson) is released from prison.

A few Chilean soldiers can be seen with Halcón M-57 submachine guns. Unlike the M3A1 "Grease Gun", the Halcón is only seen in one scene in the background.

A soldier to the far left in the background holds the Halcón (See Talk page for Promotional Pictures).

A close up of the muzzle while a soldier opens the prison gates.

The stock of the paratrooper variant is seen.

Chilean soldiers getting out of a Jeep armed with the FALs.

Another Chilean with an FAL with wooden stock.

1909 Argentine Mauser rifles are used by Chilean troops and Paul Schäfer's (Michael Nyqvist) men. In reality, Chilean soldiers used their own M1895 Mausers as their standard bolt action rifles during this time, alongside with semi-auto M1 Garands.

Chilean on the left holds a Mauser rifle in the streets of Santiago de Chile on September 11, 1973.

The receiver and straight bolt handle are seen on the right. 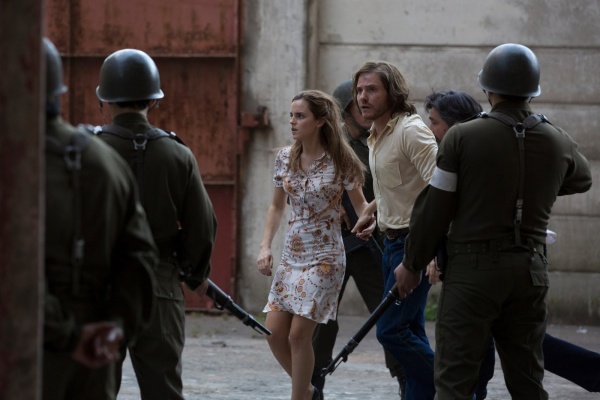 Promotional Picture. The auxiliary bayonet lug can be seen on the right one.

Short-barreled Mauser rifles can be seen held by some soldiers. Due to the filming of this scene taking place in Buenos Aires, they are most likely Argentine M1909 Mountain carbines standing in for Chilean Mauser 1935 carbines.

The soldier on the left holds the rifle. 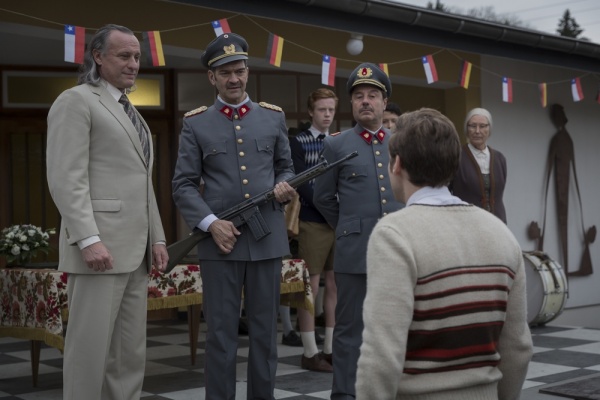 Promotional Picture of this scene.

At least one sect member is armed with an M1 Carbine.

The sect member in background left.

A Madsen machine gun is briefly seen at the beginning of the coup.

The Madsen manned by a soldier on a Jeep.
Retrieved from "https://www.imfdb.org/index.php?title=Colonia&oldid=1358481"
Categories: