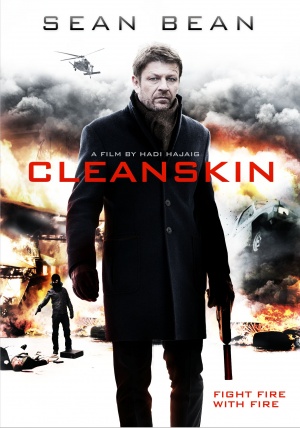 The following weapons were used in the film Cleanskin:

Ewan (Sean Bean) uses a SIG-Sauer P226 throughout the film. It is sometimes fitted with a suppressor.

Ewan's SIG lies on the table.

Ewan aims his SIG at an assassin.

Ewan searches through Paul's house. His SIG suddenly gains a suppressor, though it is possible it was put on offscreen.

Ewan's SIG lies on the ground.

Ewan threatens a man with his SIG-Sauer.

Ewan covers the suicide bomber with his P226.

Ewan's partner Mark (Tom Burke) carries what appears to be a Walther P99, also sometimes fitted with a suppressor.

Several of the terrorists in the film carry and use Beretta 92SB pistols.

Ash (Abhin Galeya) racks the slide on his Beretta 92SB.

Ash, balaclava on, aims his Beretta.

Yussif (Chris Ryman) checks the chamber of one of the Berettas.

A Steyr M9-A1 is carried by Harry (Sam Douglas) and is handled by Rena (Shivani Ghai).

Rena toys with the Steyr.

Rena continues to play with the weapon.

Rena looks at the Steyr's barrel.

A police officer in a news broadcast carries an MP5A3 with attached sight.

The officer with an MP5A3.
Retrieved from "https://www.imfdb.org/index.php?title=Cleanskin&oldid=1091583"
Categories: