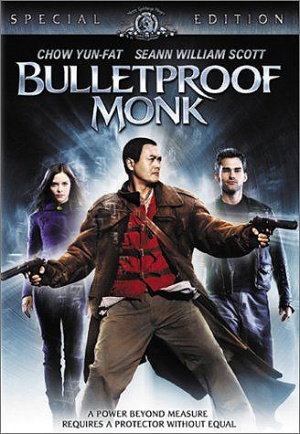 The following weapons were used in the film Bulletproof Monk:

A Luger P08 is used by Colonel Strucker (Karel Roden) during the World War Two sequences, when he is an active duty Waffen SS Gebirgsjäger Standartenführer ("SS Mountain Infantry Colonel").

Colonel Strucker fires his Luger P08 at the Monk.

Some of Strucker's (Karel Roden) henchmen carry Beretta 92FS pistols. Notably in one scene, a henchman on the roof carries a Beretta 92FS until he bursts onto the roof, then he is carrying a Heckler & Koch USP Compact pistol, but the gun changes back to a Beretta 92FS when he fights with Kar (Seann William Scott).

One of Strucker's henchmen searches the roof with his Beretta 92FS.

A pair of Strucker's henchmen fire their Beretta 92FS pistols at Kar (Seann William Scott) and the Monk (Chow Yun-Fat).

A henchman's gun changes to a Heckler & Koch USP Compact on the roof (which is a continuity error, see above).

Continuity Error: When Strucker's henchman fights with Kar, his gun changes to a Beretta 93R with the foregrip removed and a normal Beretta 92 barrel installed.

Strucker's henchmen use IMI Desert Eagle Mark I pistols against the Monk (Chow Yun-Fat), who famously gets hold of them and uses them to shoot the guns from henchmen's hands.

Two CGI generated Desert Eagle pistols fly in the air so that the Monk can grab them.

The Monk (Chow Yun-Fat) fires one of Desert Eagle pistols.

Close-up of the Desert Eagle firing, clearing indicating that it is the early Mark I model.

The Monk (Chow Yun-Fat) fights with a henchman who has a Glock 19 in the helicopter. The lack of thumb rests and rail prove this to be a second generation model.

The Monk (Chow Yun-Fat) shoots a SIG-Sauer P226 out of a henchman's hand.

One of Strucker's henchmen fires his SIG-Sauer P226.

A henchman uses his SIG-Sauer P226 to threaten a Buddhist monk.

During the raid, Nina Strucker (Victoria Smurfit) aims her SIG-Sauer P230 at a monk.

MP40s are used by Waffen SS Gebirgsjäger troops during the World War Two sequences at the Buddhist temple.

Colonel Strucker interrogates the monks with his mountain troops ready their MP40s.

Strucker's bodyguards at the compound fire their MP5A3s at Jade's (Jaime King) car.

Strucker's henchmen assault the Monk's building with a helicopter transporting a GE M134 Minigun. Instead of an 'acetylene' fake Minigun that has been used in other films, this is a real GE M134 Minigun, as evidenced by the loads of spent brass and belt segments flowing out of the sides.

The flashbang grenade rolls on the floor prior to detonation.
Retrieved from "https://www.imfdb.org/index.php?title=Bulletproof_Monk&oldid=1270716"
Categories: