Blue Steel is a 1989 thriller directed by Kathryn Bigelow (The Hurt Locker) and starring Jamie Lee Curtis as Megan Turner, a rookie NYPD cop who must track down a crazed Wall Street trader (Ron Silver) who has gone on a killing spree with a gun he found at Turner's first shootout.

The following weapons were used in the film Blue Steel:

At the beginning of the film, we see police officers undergoing training for a hostage situation. A simulated scene of domestic abuse is used, with the "husband" holding a (most likely unloaded) M1911 to his "wife's" head and threatening her. 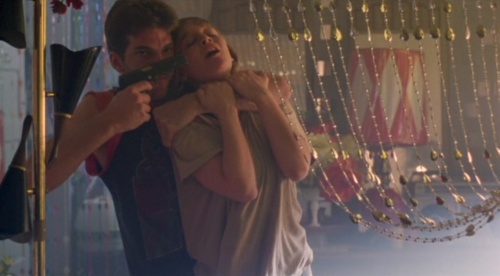 A Smith & Wesson Model 29 is one of the main guns in the film. Originally belonging to "Wool Cap" (Tom Sizemore) a robber who uses it to hold up a grocery store, it finds its way into the hands of mentally unbalanced Wall Street trader Eugene Hunt (Ron Silver), after the criminal is shot and killed by Officer Megan Turner (Jamie Lee Curtis). Eugene appropriates the gun and subsequently goes on a killing spree with it. 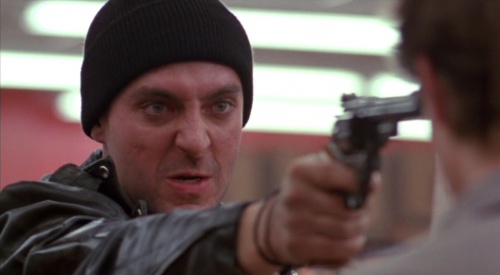 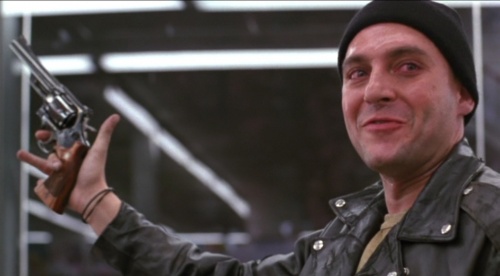 Wool Cap holds the Model 29 up in mock surrender when told to give himself up.

After Wool Cap is shot by Turner, the revolver lands beside Eugene. 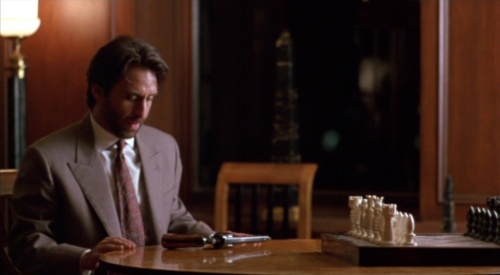 Eugene stares in rapt fascination at the gun after taking it home. He behaves here as though he's never even seen a gun before. 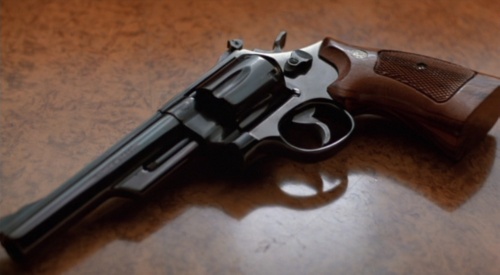 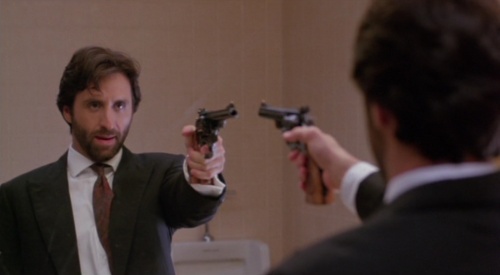 Prior to committing his first murder, Eugene Hunt (Ron Silver) takes the gun with him to work and points it at his own reflection in the men's restroom.

Officer Megan Turner (Jamie Lee Curtis) uses a heavy-barrel Smith & Wesson Model 10 with Pachmayr rubber grips as her duty sidearm for most of the film. 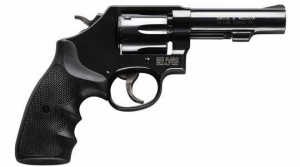 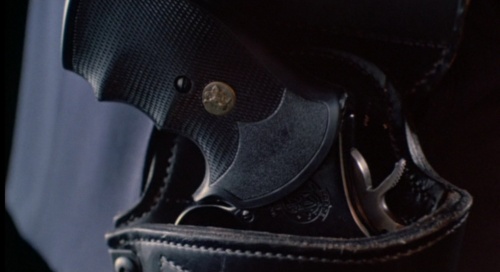 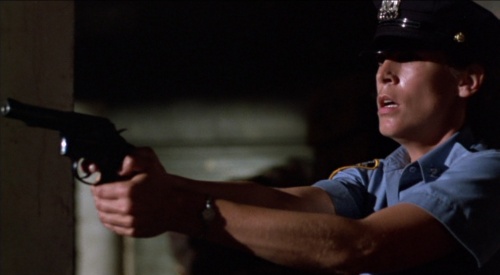 Officer Turner with her revolver out sneaking in through the backdoor of the supermarket to foil the robbery in progress. 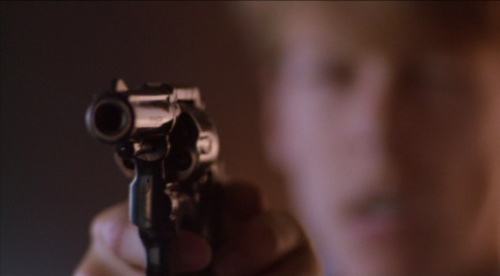 Closeup of the barrel of Turner's S&W.

The crazed Eugene (Ron Silver) encourages Turner to put her gun to his head. 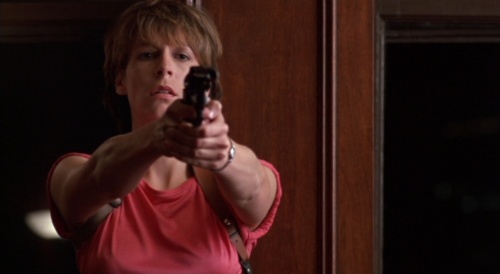 Turner (Jamie Lee Curtis), realizing Eugene is the ".44 Magnum Killer", points her gun at him. 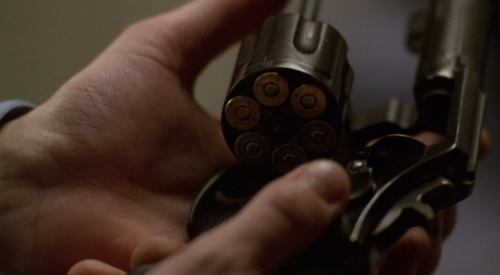 Later, Turner appropriates another officer's Smith & Wesson Model 10 to use against Eugene in the final gunfight. She checks to see that the other cop's sidearm is loaded. 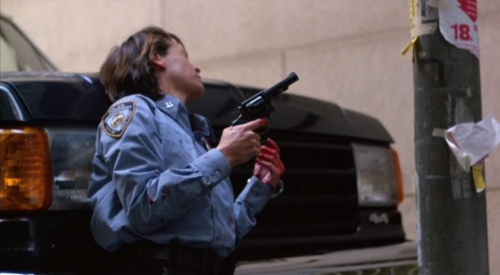 An injured Turner takes refuge behind a pickup truck during the firefight. 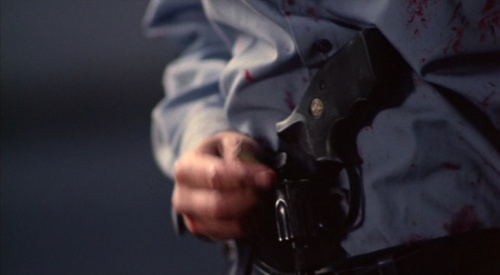 With one arm shot, Turner reloads her revolver by sticking the barrel into the waistband of her pants and putting the bullets into the cylinder that way. 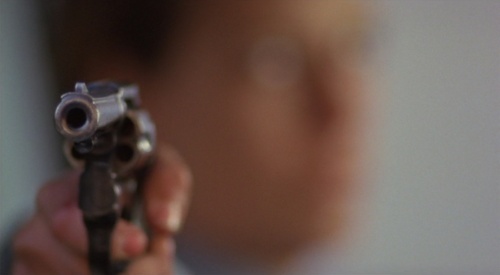 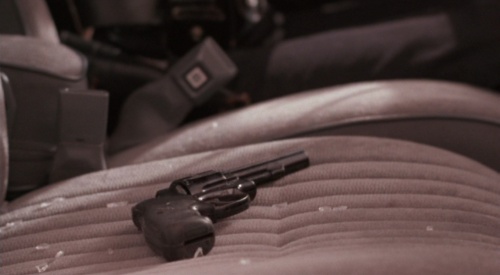 After killing Eugene, Turner lets the revolver fall into the passenger seat of the car. 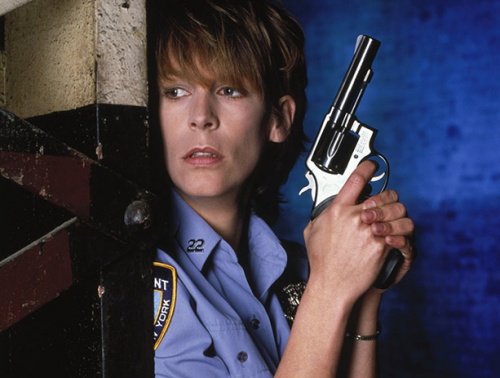 Publicity still of Jamie Lee Curtis in character as Turner. Good look at the Model 10. 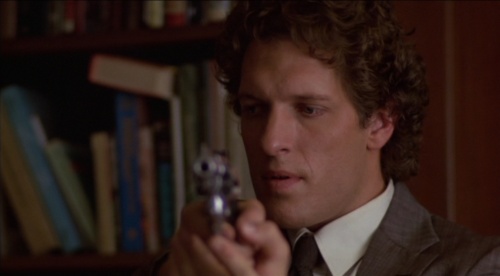 Mann has his S&W out when he and Turner investigate Eugene's home. 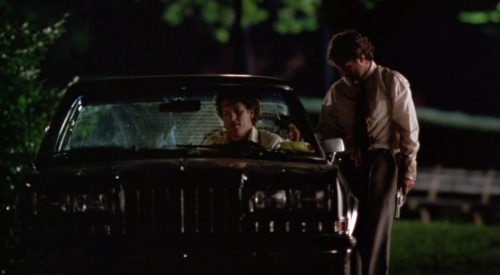 Side view of Mann's S&W as Eugene holds it.

As part of the simulation, after the trainees "kill" the faux husband (they fire blanks and he falls down), the faux wife pulls an automatic pistol from her purse, "killing" the trainees if they're not quick enough. 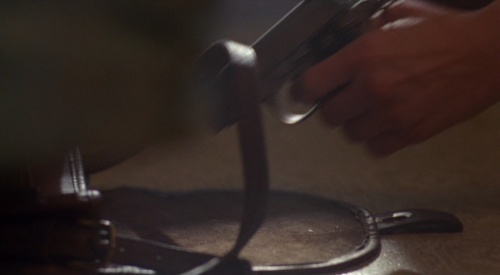 The "wife" pulls her gun from her purse. This is the only decent view of it; the shots of her firing it are dark and suffer from motion blur making a decent screen cap difficult. Judging by the 1911-like take-down lever, the overall size, and the film era, the Colt Mustang is a likely possibility.
Retrieved from "https://www.imfdb.org/index.php?title=Blue_Steel_(1989)&oldid=1372768"
Categories: