Block 18 (Russian: Владение 18; Vladenie 18, or Vladeniye 18) is a 2014 Russian mystery horror movie. A newlywed couple purchase a new apartment for an incredibly low price. But, after they move into their new dwelling, they soon realize that the building is inhabited by evil spirits.

The following weapons were used in the film Block 18 (Vladenie 18):

Yury Gennadyevich, a security guard (Boris Polunin) owns a Umarex Walther P88 Compact with chrome finish and black grips. Later, this gun appears in the hands of Maxim Galanin (Dmitriy Endaltsev), who fires it until it runs out of ammo. 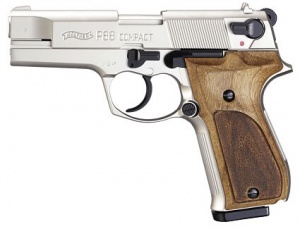 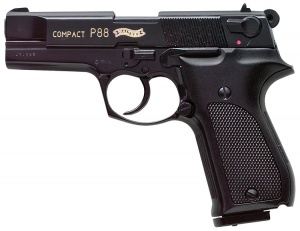 Close-up view of the pistol.

Yury Gennadyevich aims his pistol at Svetlana. Note the he doesn't holds his finger on the trigger, rather he places it directly behind the trigger.

The pistol lying on the floor. Note the Walther logo.

Perfect view of the Walther.

The Walther is fired again, note the empty casing.

The pistol is now empty.

A better view of the slide...

The pistol is partly seen.

Close-up view of the muzzle and trigger guard.

Two policemen are armed with AKS-74s.

Policemen with their AKs

The barrel is partly seen.

An AK is partly seen at the right.

The trigger, trigger guard, and grip are seen at the right.

The barrel of an AK is seen.

An AK is partly seen.

The folding stock is partly seen.
Retrieved from "https://www.imfdb.org/index.php?title=Block_18&oldid=1459944"
Categories: