Black '47 is a 2018 Irish-Luxembourgish period drama directed by Lance Daly. Set in Ireland in 1847, during the Great Irish Famine, the film follows the story of Irish soldier Feeney, a veteran of the British Army in the Connaught Rangers who returns to Ireland to discover that his mother had died of starvation and his brother has been hanged for stabbing a bailiff resisting eviction. Feeney is eventually arrested by the Royal Irish Constabulary before escaping, leading to a chase across Ireland led by bounty hunter Hannah, who served with Feeney in Afghanistan. Black '47 held its world premiere on 2 March 2018 at the Berlin Film Festival, before being released on 7 September 2018 in Ireland by Element Pictures. The film received generally positive reviews from a number of critics, and was a box-office success in Ireland.

The following weapons were used in the film Black '47: 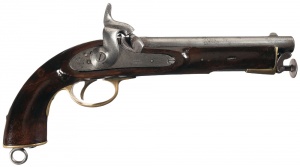 Sgt. Fitzgibbon carries his pistol on his belt.

The end of the grip is seen.

Feeney riding slowly through a village with his received Tower pistol.

A full view of Fitzgibbon's pistol.

Pope approaches a shot horserider with his pistol in hand

A local rent collector owns a Flintlock Pistol during the unexpected meeting with Feeny.

The rent collector points the pistol at an unimpressed Feeny.

Hannah smashes the pistol's muzzle on the table.

The Two policemen hold their carbines after firing.

Left side view of three carbines aimed by the policemen.

Pvt. Hobson takes cover during the ambush of Feeny.

Shortly after, he holds him at gunpoint.

A close view of the percussion cap system.

Full left side view of his Brown Bess.

Another soldier presents his musket to the riding by Pope.

Baker Rifles are wielded by Hannah (Hugo Weaving) and Pope (Freddie Fox) which are like the Brown Bess muskets percussion conversion. A Flintlock Baker Rifle is seen with Feeny.

The holstered Baker Rifle of Pope.

A Baker Rifle is also used by Feeny during an ambush.

Hannah brandishes his Baker Rifle during the ambush.

A left side view.

The percussion cap is seen.

Pope waits for a good shot behind his killed horse.

Feeny points his rifle at Hobson.

One of the Irish citizens is seen with a Blunderbuss.

The Irishman on the left carries the Blunderbuss.
Retrieved from "https://www.imfdb.org/index.php?title=Black_%2747&oldid=1482135"
Categories: