Billion Dollar Brain is the third installment in the original trilogy of Harry Palmer films that began with 1965's The Ipcress File. Michael Caine returned as Palmer and the film was adapted from another one of the Len Deighton novels and was directed by Ken Russell (Lisztomania).

The following weapons were used in the film Billion Dollar Brain:

Harry with his PPK drawn.

Several characters use the Smith & Wesson Model 38 Bodyguard during the film.

A close up of the revolver as used by one of Gen. Midwinter's agents.

In a continuity error a member of the Crusade for Freedom checks his 38 Bodygaurd.

General Midwinter's guards carry Colt Official Police revolvers and one is briefly seen being loaded by a member of the Crusade for Freedom.

One of Gen. Midwinter's guards with the Colt.

A member of The Crusade for Freedom is seen loading a Colt Official before departing on the mission. In a continuity error this pistol changes to the Smith and Wesson above (probably due to the interior shots being filmed in the UK, whilst exterior shots were in Finland, so the same props were not available).

The butt of a revolver is seen poking out of the holster of a KGB soldier. It cannot be identified accurately but judging from the but shape and grips would likely be a Colt Official Police (as above).

The butt of the revolver can be seen in the holster on the right.

Some of General Midwinter's troops are equipped with MP40 submachine guns.

These weapons are carried by General Midwinters troops and one is also briefly seen being used by a Soviet soldier.

StG44 being used by a Soviet soldier. As with a number of 60's films it stands in for an AK rifle.

The soldier on the far right (circled) is carrying an StG44.

The soldier in the background (circled) is carrying an unloaded StG44. 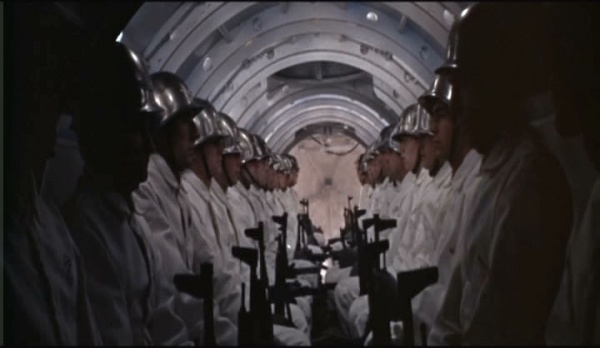 Gen. Midwinter’s troops ready for action, armed with StG44 rifles. The troops seated at the far end are actually equipped with MP40s.

The M1 Carbine is seen being used by General Midwinter (Ed Begley) and briefly by one of his soldiers in the ice scene.

M1 Carbine in the ice scene. 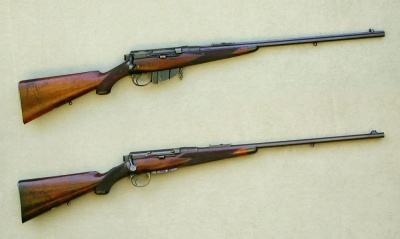 Leo with the Lee Sporter.

The Lee’s magazine is visible at the bottom of the pic.

Detail of the bolt.

Vickers K machine guns are seen twin mounted on one of the Tankers.

There are numerous weapons on display including double barrel shotguns and lever action rifles, These are indistinct so identification is a problem.

Various mock turrets are evident in this image.