Batalion (Original title: Batalyon - Russian: Батальонъ) is a 2015 Russian war drama about the biography of Mariya Bochkareva, was a Russian woman who fought in World War I and formed the Women's "Battalion of Death".

The following weapons were used in the film Batalion:

Mariya Bochkareva (Mariya Aronova), her deputy Lt. Seleznev (Nikolay Auzin), both instructors - Yefim Zadorozhnyy (Konstantin Vorobyov) and Alexey Kolokolchikov (Yakov Shamshin) and most Russian officers carry a Russian Nagant M1895. The revolvers are mostly of post-1930 version. At least one of it appears to be a Blef ("bluff") blank firing revolver, a conversion of live Nagant. 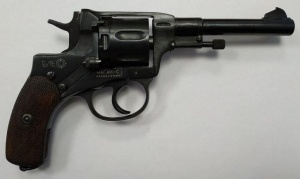 Mariya Bochkareva (Mariya Aronova) clutched her revolver to her chest in the final battle.

Lt. Seleznev (Nikolay Auzin) holds his sidearm in hand during a trench battle.

The instructor Zadorozhnyy (Konstantin Vorobyov) with his Russian Nagant M1895 in a hand.

The instructor Kolokolchikov (Yakov Shamshin) fire his sidearm in battle.

The adjutant of Colonel Tseplyaev (right) pulls his sidearm from holster.

Russian Nagant M1895 is seen also in Tseplyaev's (Evgeniy Dyatlov) hand. Note the groove on the frame between the cylinder and the barrel, it's a feature of Blef. Soldiers in the background carry M1891/30s.

German officers in the film can be seen exclusively with a C96 Mauser "Broomhandle" pistol in hand.

A German officer in gas mask holds his C96.

A C96 Mauser "Broomhandle" is held by a German officer as the woman attacks.

An officer at the head of German troops in the final battle also holds his pistol.

The women - the soldiers on the shooting range with their rifles during training.

Dusya Grynyova (Yanina Malinchik) defused one of the German spies by a bayonet on her rifle.

Original Mosin Nagant M1891 rifles also can be seen, although much less frequently. They have rifle slings fitted in holes in the stock, not in swivels, so they appear to be M1891 Dragoon rifles.

The second and third rifles in a row appear to be M1891s.

Closeup of the muzzle of this rifle.

Vera Neklyudova (Valeriya Shkirando) holds his weapon during the fight in a trench.

Serafima Pluzhnikova (Anna Kuznetsova) with her rifle in final fight.

Many of Imperial German soldiers are armed with Gewehr 98 rifles.

Closeup up of the lock of this rifle.

A falling German soldier on left from Tonya (Mila Makarova) (middle) holds a Gewehr 98 in his hand.

Gewehr 98 also carries one of the soldiers (right) which protects an officer.

Some German soldiers are seen with Mauser 98AZ Artillery Carbines.

Some German artillerymen during a gas attack are seen with these rifles.

A German soldier who leaps into the trench holds a rifle who is similar to VZ-24 Czech Mauser.

The Kar98k being fired.

German infantryman in the trenches aims his rifle.

Private Dusya Grynyova (Yanina Malinchik) seized a Madsen machine gun in the German trench. The shape of the magazine matches versions in German 7.92x57mm Mauser caliber, but generally, this Madsen looks more like 1920s-1940s versions as early Madsens had a different barrel shroud.

Dusya defused a German machine-gunner and grabbed his weapon.

Then she mows down the German soldiers in the trench.

Both gunners during the gas attack in masks.

In the final battle defending their position.

On the edge of the trench is seen the German MG08/15 machine gun.

The unused Maxim on the left.

German soldiers and also one of the women-volunteers use anachronistic Model 24 Stielhandgranates.

Imperial German soldiers before the attack with hand grenades hung on their belts.

Several women from "the battalion of death" also pick up in the fight Model 24 Stielhandgranates.

Serafima triggered a grenade in her hand ...

... and threw him against the German soldiers in the trench.

German artillery used mortars for firing gas-grenades. They appear to be mockups that bear only marginally resemblance with real Gaswurfminen. 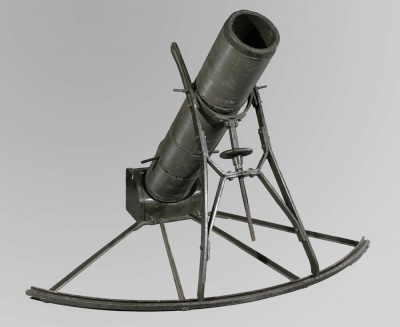