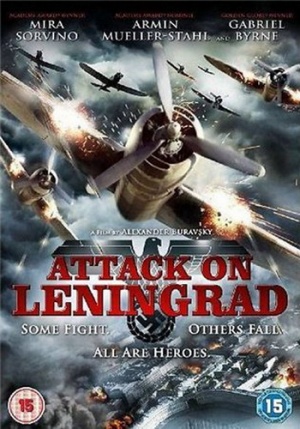 Attack on Leningrad (originally released in Russia as Leningrad) is a 2007 World War II drama that focuses on the dramatic siege of Leningrad (now called by its original name, Saint Petersburg) by the Nazi German invading forces. Due to a sudden shift of army units to other fronts, the German High Command decided to conserve resources and starve Leningrad's three million inhabitants out, rather than take the heavily defended city by force. The siege would eventually last about nearly 900 days, from 8th September 1941 to a full lift of the siege of the city on 27th January 1944, incurring a high number of civilian and military casualties.

British reporter Kate Davis (Mira Sorvino) gets stuck in the snow covered starving city during the last few weeks of 1941 and befriends police officer Nina Tsvetkova (Olga Sutulova) and her family. Kate’s friend, the American journalist Philip Barker (Gabriel Byrne), staying in Moscow to cover events there, is heartbroken and embarks on a dramatic journey to be reunited with Kate. In the meantime, Kate and Nina are fighting for their own survival and that of the people in the besieged city.

Even though the movie centers on the personal relations between the main characters, the movie has an epic first few minutes (quite like the beginning of Saving Private Ryan), in which the last defending battle is shown before Leningrad becomes fully enclosed. It must be noted that with the exception of police officer Nina none of the leading actors are actually seen handling a gun so for this reason most descriptions will simply say ‘Soviet army officer’ or ‘German soldier’.

The following weapons were used in the film Attack on Leningrad:

The Nagant M1895 revolver is used by police officer Nina (Olga Sutulova) as her personal side-arm throughout the movie.

Nina taking cover from German fire in a trench with her Nagant M1895.

Nina using her Nagant M1895 to make sure that the orders she just delivered to a commanding officer at the frontline will be carried out.

A fine image of the Nagant M1895 being used by Nina to fire a warning shot.

A Tokarev TT-33 pistol is seen used by the Soviet army officer leading the last desperate charge against the Germans before Leningrad is totally surrounded.

Most of the defenders of Leningrad are carrying the Mosin Nagant M91/30 rifle.

Soviet soldier has a Mosin Nagant fitted a bayonet.

The PPSh-41 submachine gun is seen in the dramatic scenes where Nina Tsvetkova (Olga Sutulova) and other selected members of the Leningrad defence forces are given the dangerous task of guarding trucks supplying the city over the ‘Road of Death’. This is a make-shift highway over the frozen ice of Lake Ladoga that acts as the only supply line of the city during the winter.

Nina and her comrades have the PPSh-41s.

In the opening scene, a Maxim M1910/30 machine gun with the typical Sokolov shield can be seen in a defensive trench position.

The Maxim in red circle.

A Vickers Mk1 machine gun mounted on an air-defence tripod is seen when supplies are unloaded from ships that have crossed Leningrad’s only connection with the outside world, Lake Ladoga. It can be distinguished from the Maxim M1910/30 by the sleeker receiver and the fact that the gun is supported on the receiver, rather than on the water jacket a few inches in front of the receiver, as would be the case with an Maxim M1910/30. It may be surprising to see an English machine gun here, but it has probably ended up in Russia as part of Allied support shipments.

The Vickers on the right.

RGD-33 stick grenade is used by Soviet officer at the beginning of the movie. 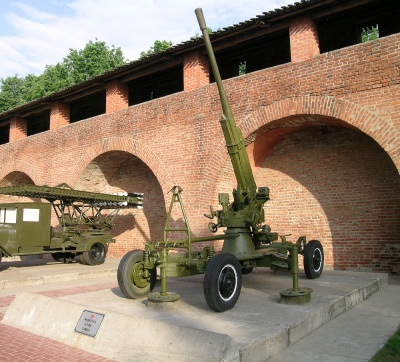 Soviet soldiers with the 52-K.

Soviet soldiers with the 52-K.

In several scenes, German soldiers are seen using Karabiner 98k rifles. In most cases during the trench hand-to-hand combat, the rifle is equipped with a bayonet.

An MP40 (or possibly even an MP38, but there's not enough detail to tell for sure) is seen used by several German soldiers during the opening battle. In one instance, the MP40 is used by a German soldier as a club, which might be appropriate because of the single-columned MP40’s reputation of being prone to jams caused by bad weather circumstances on the Russian front.

The MG34 machine gun appears in several scenes, in most cases mounted on German motorcycles.

In the scene where Kate Davis and other reporters visit a battlefield, a Russian reporter searches the remains of one of the killed German drivers of the MG34 equipped motorcycle for food, showing the desperate food situation in the city.
Retrieved from "https://www.imfdb.org/index.php?title=Attack_on_Leningrad&oldid=1190968"
Categories: