Anthropoid is a 2016 coproduction war thriller directed by Sean Ellis and based on true story of Operation Anthropoid, the WWII mission to assassinate SS General Reinhard Heydrich. The two key Czechoslovak paratroopers sent from the United Kingdom to perform this mission are played by Cillian Murphy as Jozef Gabčík and Jamie Dornan as Jan Kubiš. This topic has already been treated in the Czech film Atentát (1963) and also partly in Sokolovo (1974).

The following weapons were used in the film Anthropoid:

Czech paratroopers and several resistance fighters are armed with the Colt 1903 Hammerless Pistol. A Colt M1903 pistol was Jan Kubiš' sidearm during the real attack. 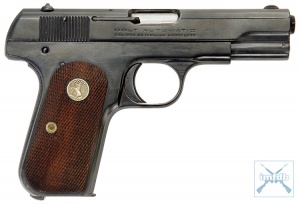 Realizing the situation is hopeless, Jan puts the pistol to his head.

Jozef Gabčík (Cillian Murphy) loads his pistol in the crypt.

Closeup of the pistol in the hands of Lenka Fafková (Anna Geislerová).

Josef Valčík (Václav Neuzil) fires his pistol on the street during the assassination.

Adolf Opálka (Harry Lloyd) holds a gun during the battle in the church.

Jan Hrubý (Mish Boyko) in the crypt with his pistol in hand.

A resistance fighter is seen with the Frommer Stop pistol. 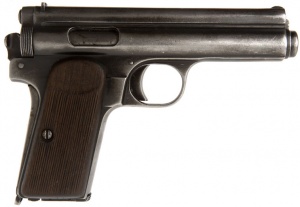 At the left, a resistance fighter is seen with the Frommer Stop pistol pointed.

A Walther PP pistol is used by Reinhard Heydrich (Detlef Bothe). In real life, Heydrich was armed with a Luger P08 at the time of the attack.

One of the German soldiers is seen using a Bergmann MP18/I "System Schmeisser" submachine gun, featuring a straight magazine well.

The soldier to the left uses the MP18.

The MP40 is used by some SS soldiers.

The Czech paratroopers from England are equipped with Sten Mk II submachine guns, which are initially used in an attempt to shoot Heydrich during the assassination.

Jozef Gabčík (Cillian Murphy) pulls a Sten at Reinhard Heydrich in the car.

But as in real life, his Sten jams.

Jan Kubiš (Jamie Dornan) and Josef Bublík (Sam Keeley) during the battle in the church.

The main battle rifle for the German forces is the Karabiner 98k.

German soldiers armed with the rifle.

Short Barreled Side by Side Shotgun

An MG34 machine gun is used by Nazi gunners in the fight with the Czech paratroopers in the church.

The MG34 is seen loaded.

A Model 24 Stielhandgranate "Potato Masher" is used by SS soldiers during a battle in the church.

The grenade is thrown into a room.