Andrey Mironov holds a Percussion Dueling Pistol as Markiz in The Property of Republic (Dostoyanie respubliki) (1971). 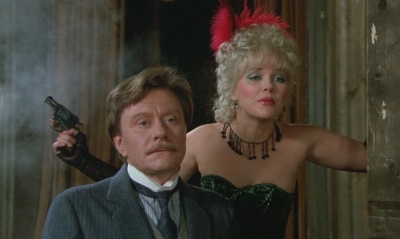 Andrey Alexandrovich Mironov (March 8, 1941 – August 16, 1987) was a famous Soviet stage and screen actor who played lead roles in some of the most popular Soviet films, such as The Diamond Arm (Brilliantovaya Ruka), Beware of the Car (Beregis avtomobilya), The Twelve Chairs (Dvenadsat stulyev), A Man from the Boulevard des Capucines (Chelovek s bulvara Kaputsinov) and many others. He had a wide comedic range and played diverse roles. Mironov was also a popular singer. In 1987 he lost consciousness while performing the lead role in theatre play The Marriage of Figaro and two days later he was pronounced dead due to a congenital cerebral aneurysm.