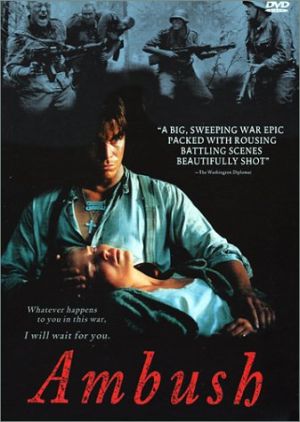 Ambush (Rukajärven tie) is a 1999 Finnish Movie about the Russo-Finnish "Continuation War" (1941-1944), year after "The Winter War". It takes place in 1941 and deals with a Finnish military unit that is ordered to conduct active reconnaissance of Russian positions. The story also deals with the character of Lt. Eero Perkola (Peter Franzén) and the circumstances of his life that leads to his actions in the field. The film is actually based on a true long range patrol story.

The following guns were used in the movie Ambush (Rukajärven tie)

A Russian Nagant M1895 is found in the backpack of a Russian refugee fleeing the platoon.

The contents of a Russian refugee's pack - a religious icon and a Nagant revolver. Note the rounded front sight - this is a very early Liege-made example.

The Finnish sub-machine gun Suomi M31 is carried and used by Finnish soldiers.

A member of the platoon lies with his Suomi sub-machine gun.

Finnish-made copies of the Mosin Nagant Rifle, M39 Finnish Mosin-Nagant Rifle rifles, are carried and used by Finnish soldiers throughout the film. NOTE: Altough the rifle looks almost exactly like the russian Nagant, the parts of these rifles are NOT interchangable (except the bolt, trigger, and magazine.)

Corporal Snicker with his Mosin-Nagant M/39.

A member of the platoon aims his M/39.

A member of the platoon carries his M/39.

The rifles carried by Russian soldiers are Mosin Nagant M91/30s. One is most notably found leaning against an abandoned cabin door.

An abandoned Mosin-Nagant M91/30 found leaning against an empty cabin.

A Tokarev SVT-40 is carried by a Russian Sergeant who decides not to ambush the Finnish platoon.

The Russian Sergeant aims his SVT-40.

The light machine gun carried by Finnish soldiers is a Lahti-Saloranta LS/26.

A Finnish soldier fires his Lahti-Saloranta from the hip.

A member of the platoon aims his LS/26.

The platoon uses a captured and re-issued Degtyarov DP-28 LMGs throughout the film.

A member of the platoon carries his DP-28.

The platoon kills a Russian Maxim M1910 machine gun crew during the final battle of the film.