All The Devil's Men

All The Devil's Men is a 2018 British film starring Milo Gibson.

The following weapons were used in the film All The Devil's Men:

A 3rd Generation Glock 17 is used by several characters.

Collins (Milo Gibson) and his Glock 17. 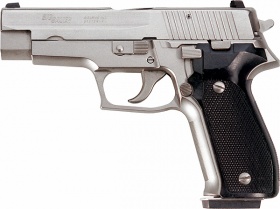 A gunman holds what appears to be a Heckler & Koch MP5K.

A gunman holds what appears to be a Brügger & Thomet APC9.

Collins (Milo Gibson) appear to use a Remington Model 870.

Samuelson (Gbenga Akinnagbe) is armed with a Heckler & Koch HK416D. A gunman also uses an HK416D.

The magazines have been linked together for faster reloads.

A gunman is armed with an FN SCAR-L fitted with an ACOG.

A pair of M18 Smoke Grenades are seen in a bag of weapons.