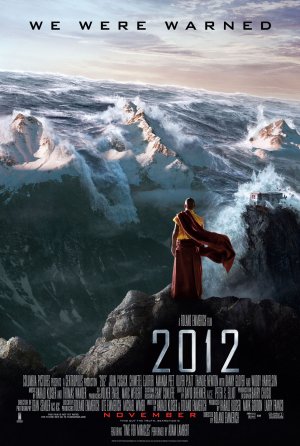 The following weapons were used in the film 2012:

U.S. Army soldiers are armed with M4A1 carbines at Yellowstone National Park when they detain Jackson Curtis (John Cusack) and his children, one of them fitted with a RIS foregrip.

A U.S. Army soldier (left) armed with an M4A1 carbine as he detains Jackson Curtis and his children

U.S. Army soldiers in the background are armed with M4A1 carbines at Yellowstone

One Remington 870 shotgun was seen in the hands of a U.S. Army soldier at Yellowstone National Park, with spare shotshell holders on the side of the receiver and a speedfeed stock.

A U.S. Army soldier (right) armed with a Remington 870 shotgun as Jackson and his children are detained

Another shot of a Remington 870 shotgun in the hands of a U.S. Army soldier, this time showing the speedfeed stock

Chinese PLA soldiers are armed with Norinco QBZ-97 rifles at the Ark launch docks in Cho Ming, Tibet. Due to the movie being filmed in Canada, the 5.56x45mm export version was used instead of the 5.8x42mm domestic version.

Chinese PLA soldiers aiming QBZ-97 rifles at Curtis and the rest of the survivors from the plane.

One of the Chinese PLA soldiers at the Ark docks in Cho Ming can be seen armed with a Norinco QBZ-97B carbine. Since the movie was filmed in Canada, the production crew utilised Canadian film armourers who had Norinco QBZ-type rifles.

One of the Chinese PLA soldiers to the right can be seen holding a Norinco QBZ-97B carbine
Retrieved from "https://www.imfdb.org/index.php?title=2012&oldid=1475159"
Categories: