1944 is a 2015 Estonian war drama film directed by Elmo Nüganen (Names in Marble). In occupied Estonia, Karl Tammik, stationed at the Tannenberg Line, fights in the Waffen-SS while Jüri Jõgi has to serve as an officer in the Red Army. Like thousands of their compatriots, the young Estonians somehow want to survive the war and they have no choice. Either they go for the Russian occupiers to arms or stand under Hitler's banner in the Waffen-SS. The fate of the two soldiers exemplifies the story of a whole country that was almost crushed between the mills of two great powers, forced into a war. It was selected as the Estonian entry for the Best Foreign Language Film at the 88th Academy Awards but it was not nominated.

The following weapons were used in the film 1944:

The Walther P38 is briefly used by Leonhard "Talu" (Kristo Viiding) after he has no more machine gun ammunition.

Talu takes the pistol as Soviet soldiers approach his position.

The Estonian NKVD commissar Kreml (Peeter Tammearu) is armed with a Tokarev TT-33.

The TT-33 cleaned by Kreml during a meeting with Jüri Jõgi.

Kreml is about to take aim his pistol at Captain Viires for disregard of a command.

The MP38 is used by Estonian SS soldiers including Karl, Raadik, and Voldemar 'Piir' (Henrik Kalmet).

Piir aims his MP38 and waits to open fire.

A close up of Raadik firing his MP38.

After reaching the Soviet trench Piir holds his submachine gun at the ready.

An MP40 is very briefly seen being reloaded by the medic SS-Oberschütze (Private 1st class) Elmar 'Säinas' (Pääru Oja). Due to a continuity error, the MP40 turns into an STG-44 when he gives it to Ants Saareste.

The MP40 in his hands. Note the different charging handle and muzzle.

Soviet Soldiers are armed with PPSh-41 submachine guns while Estonian SS soldiers use captured ones.

Ants Saareste and other Estonians soldiers infiltrate a trench with their trophy PPShs.

The brother of Anton Käärid (Priit Pius) with PPSh-41.

Jüri and Captain Evald Viires with PPSh-41s during the search for German soldiers in the woods.

Vladimir Kamenski rests his PPS-43 after a Soviet assault.

Soviet Soldiers resting in Tallinn. The soldier in the center is armed with a PPS-43.

After shooting three surrendering German soldiers he changes the magazine.

The PPS in his hands while searching for Germans.

During the dispute with the commissar he takes aim with his PPS.

Anton Käärid's Karabiner next to him.

Raadik reloading his Karabiner during a firefight.

The bolt is seen on the left which means that the scene is reversed.

The leader of the Defense squad encountering the soldiers carries the rifle over his shoulder.

Anton Käärid aims the rifle while in a German trench.

A closer view of the bolt and the hex receiver.

He holds his rifle at Alfred and wonders if he lost his mind.

Rudolf Kask with the Carbine in Tallinn.

Clear shot of the front sights.

Four Civil Guards with slung rifles are given captured weapons.

Soviet soldiers marching in Tallinn with their shouldered Mosins.

Another soldier wields the SVT during a charge.

The Sturmgewehr 44 is used by Estonian soldiers, especially the leader of the squad SS-Oberscharführer (Technical sergeant) Ants Saareste (Gert Raudsep) and SS-Rottenführer (Corporal) Kristjan 'Põder' (Hendrik Toompere Jr. Jr.) during the trench fighting. After his Sturmgewehr 44 runs empty he exchanged it with a PPSh-41.

Estonian soldier on the left aims his STG-44.

The medic is filling empty magazines with new 7.92x33 cartridges.

Ants Saareste takes a sip from his hip flask before he goes over the top during the night.

Later on, he is seen unlocking the assault rifle.

He empties his STG-44 during the trench raid.

The MG42 is used by Danish and Estonian SS soldiers. Near the end of the movie, German soldiers use this machine gun as well.

A German soldier fires the MG42 at approaching Soviets. Note the unhooded front sight of the Kar98k on the right.

The front view of the same soldier firing at Soviet soldiers is clearly reversed.

An abandoned MG34 is briefly seen in a German trench.

The MG34 next to its dead user while Soviet soldiers passing by.

During the heat of battle, he deploys the bipod...

A Soviet soldier next to Capt. Viires carries a DP-27/28.

Having cleared out the German position, Oskar fires at retreating German soldiers.

A Maxim M1910 is also briefly seen as some Civil Defense Guards desert.

The Maxim in the center towed by the deserters.

A T-34/76 rolls toward the Estonian position.

A box of stick grenades being towed by Raadik. Note the different types of the sticks.

Karl unscrews the cap before the trench raid. His collar matches an SS-Sturmmann (Acting Corporal).

Some F-1 hand grenades are thrown by Soviet soldiers including Anton Käärid.

An F-1 thrown by a Soviet soldier in the front of the Estonians.

A German soldier commits Suicide with a Model 39 Eihandgranate. 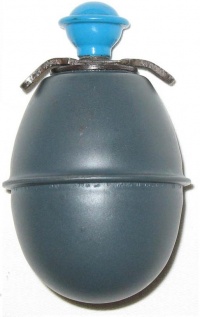 Various Estonian soldiers can be seen with Panzerfausts.

Firing the Panzerfaust at a Soviet tank.

Ants Saareste with a shouldered Panzerfaust.

A German soldier fires a Panzerschreck to knock out a T34/85.

The rocket launcher being fired by the soldier.

The Estonian SS squad has to cross a field during the night where several Stockmine mines are buried in the ground.

A 5 cm Pak 38 is operated by Dutch SS soldiers at the beginning. 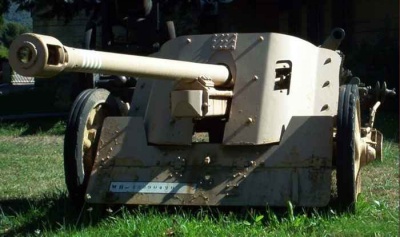 A flyover shot of the AT-Gun.

Note the "Nederland" wristband on the SS-Rottenführer's uniform.

A clearer view of the receiver. 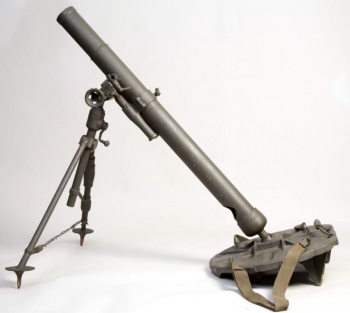 Soviet 82mm BM-37 Mortar. BM-41 has generally the same outlook except for the removable wheelbase and the arched construction base plate. 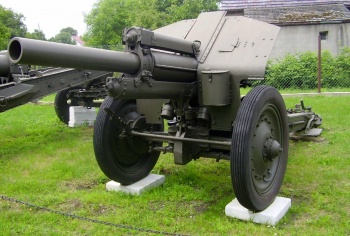