(In The Line of Fire) - Composite Pistol 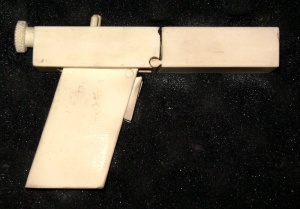 Prop double of actual pistol used in the film. 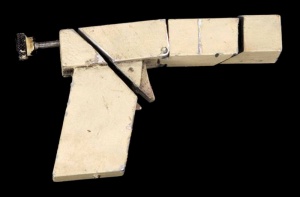 Actual firing pistol used in the film after it had been deactivated.

In the 1993 film In The Line of Fire, Booth (John Malkovich) is seen constructing this two-shot, reloadable clandestine pistol. The weapon is used to great effect several times throughout the film. The weapon appears to use .38 Short Colt ammunition, or possibly a variation of .38 S&W with unbelted cartridge cases. While a version of this "Composite Pistol" was also seen used by Russell Crowe in the movie No Way Back, the original blank-firing prop was deactivated by cutting it into three pieces after the filming of In The Line of Fire.

Other prop weapons closely based off the general design and aesthetic of this weapon (but not this exact same weapon) have occasionally been seen in other productions as well. For the sake of convenience, those appearances will be listed here as well.

The Composite Pistol and variants can be seen in the following films, television series, video games, and anime used by the following actors: