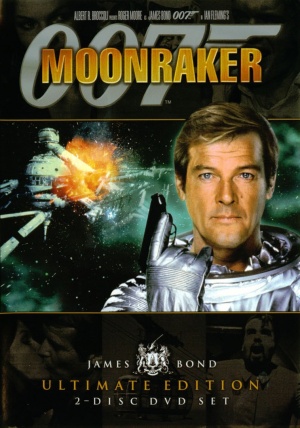 The bolt handle looks a bit too far forward for that. Possibly a Mannlicher-Schonauer sporter? IKD

Useless bit of trivia, but Drax's laser pistols were made from auto timing lights. David.

The 'rubber batons' are actually meant to be electroshock 'stun' batons - watch how they are used (& listen to the accompanying sound effect). Page altered appropriately. AnthonyB 24/03/12

Venetian police officers are armed with these smaller pistols, most probably some Beretta models.

Airport security officers at Heathrow (the only airport which has British Airways flights to Rio de Janeiro), (including Carlos Kurt) carry these revolvers in their holsters, when Jaws boards flight BA 128 to Rio de Janeiro.

Is the gun in this image really a Sterling, as the page claims?

Granted the image is blurry as hell, but that looks an awful lot like an M16 to me, with the wide handguard. The metal object projecting from the side that I'm assuming has been mistaken for a magazine actually looks to be the Mini Moke's mirror.--Leigh Burne (talk) 10:30, 10 July 2018 (EDT)

I was looking through a Hollywood memorabilia auction catalog which, among other things, included what was supposed to be a replica M-16 from this movie. I immediately recognized it as a rubber M-16A2 rubber prop which, clearly, was not in the movie. I contacted to auction company to inform them of the error and was shortly thereafter replied to by one of the site managers. Apparently he had to check on it and the story was the site's photographer took a picture of the wrong M-16 prop but it was too late to replace the pic in the catalog. Finally...my firearms trivia knowledge has some real world application. --Charon68 (talk) 23:55, 12 April 2021 (EDT)

I have a substantial collection of antique doubles and may be able to furnish pictures of others. Mzmadmike (talk) 05:30, 8 November 2022 (UTC)