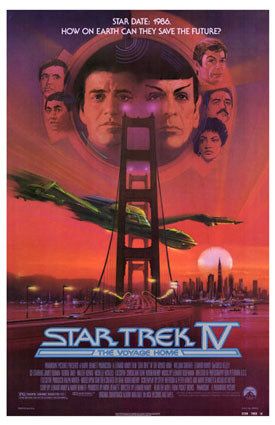 The following weapons were used in the film Star Trek IV: The Voyage Home:

The M1911A1 pistol appears in the hands of U.S. Marine officers onboard the aircraft carrier U.S.S. Enterprise in the 20th century (in reality, the U.S.S. Ranger was used in filming, standing in for the Enterprise) in the scene where Pavel Chekov (Walter Koenig) is captured, and again when he falls and injures himself trying to escape.

A U.S. Marine officer chases after Chekov brandishing an M1911A1

The majority of the U.S. Marines aboard the U.S.S. Enterprise aircraft carrier can be seen armed with M16A1 rifles as their primary weapons in the scenes where Chekov is captured and later during his ill-fated escape attempt.

Aboard the aircraft carrier Enterprise, Chekov (Walter Koenig) is confronted by Marines armed with M16A1 rifles.

In the scene where the protagonists rescue Chekov from Mercy Hospital in San Francisco, police officers are seen brandishing Smith & Wesson Model 15 revolvers while pursuing the protagonists, who use their ship's transporter to escape.

In the scene where Chekov attempts to escape from the Enterprise aircraft carrier, one of the Marines chasing him can be seen armed with an M203 grenade launcher attached to his M16A1.

US Marines aboard on the carrier Enterprise of the 20th Century are armed with the combat model of the Winchester Model 1200 shotgun, almost an equal amount of these along with the M16A1's as shotguns were and still are popular with security units in the U.S. military, which is one of the main roles of the Marines aboard ships. They feature a bayonet lug at the end of the muzzle, as well as a woodland camouflage sling that doubles as a bandolier holding a large number of spare shotshells.

A Marine makes his way up a stairwell armed with a Winchester shotgun.

A Marine armed with a Winchester 1200 Combat shotgun pursues Chekov through the hangar deck of the Enterprise.