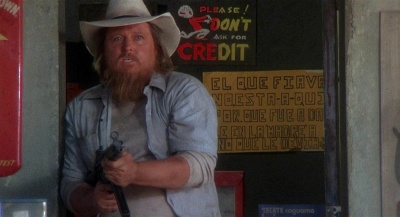 Mickey Jones was an American actor/musician who began his show business career as a drummer, performing with such artists as Trini Lopez and Bob Dylan. He would later appear in such films as Starman, Nadine, Dead Bang, and National Lampoon's Vacation in addition to such television series as Justified and Jon Benjamin Has a Van. In 1984, he appeared as Chris Farber, the right hand man to Ham Tyler (Michael Ironside) in the miniseries V: The Final Battle. Jones would later appear with Ironside in several subsequent productions, including Total Recall (1990), Extreme Prejudice, and V: The Series. He passed away on February 7, 2018 at the age of 77 after a long illness.