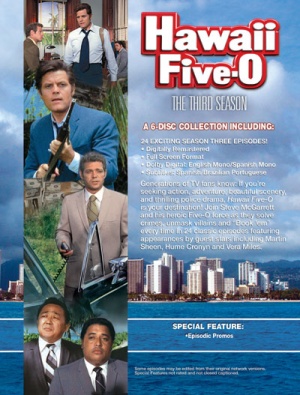 Hawaii Five-O was an American television crime series that aired in the US on CBS for 12 seasons from 1968 to 1980. The series centered around a Hawaii state police force named "Five-O", led by Steve McGarrett (Jack Lord) as it investigated major crimes committed in the 50th state. The series was also the first series to be filmed almost entirely in the state of Hawaii. A television series remake starring Alex O'Loughlin as McGarrett premiered in the US on CBS in 2010.

The following lists the seasons of the 1968 television series Hawaii Five-O: