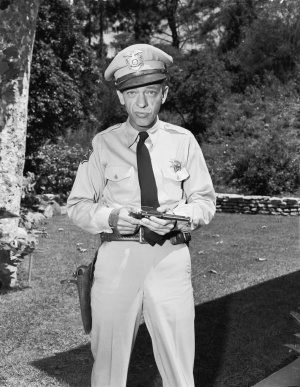 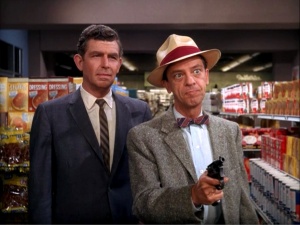 Don Knotts as Barney Fife with a Colt Detective Special, while Andy Taylor (Andy Griffith) looks on proudly, in The Andy Griffith Show (1960-1968).

Don Knotts (1924-2006) was an American actor primarily known for his comedic roles, notably as Barney Fife in 1960s series The Andy Griffith Show (for which he received five Emmy Awards for Best Supporting Actor in a Television Comedy) and as Ralph Furley in the 1980s sitcom Three's Company. He also appeared in such films as The Incredible Mr. Limpet, The Reluctant Astronaut, Herbie Goes to Monte Carlo, and The Shakiest Gun in the West.