Colt 38 Special Squad (original title Quelli della calibro 38 ("Those ones of 38 caliber")) is a 1976 Italian crime movie directed by Massimo Dallamano. Commissioner Vanni (Marcel Bozzuffi) is waging his personal war against a ruthless crime boss known as "Marsigliese" (Ivan Rassimov) who murdered Vanni's wife. A main weapon of this war is a special squad of four police detectives that ride swift bikes and carry powerful revolvers.

The signature weapon of the special squad are long barreled revolvers. Contrary to the movie title, they are neither Colts nor .38 caliber but .357 Llama Comanche, identified due to the combination of vent rib and short shrouded ejector rod (another revolver with such features is a Colt Trooper MK V but it appeared half a dozen years later than the movie was filmed). 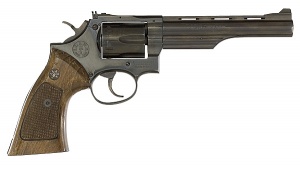 Five revolvers for the special squad.

A special squad member fires his revolver on a shooting range.

Vanni in attack on Marsigliese's hideout.

In the opening scene Commissioner Vanni (Marcel Bozzuffi) uses a Beretta M1934 pistol. It misfires when Vanni tries to shoot at Marsigliese and this leads Vanni to the idea to arm his subordinates with revolvers.

A close view of Vanni's Beretta.

In several scenes Marsigliese (Ivan Rassimov) is armed with a pistol that appears to be a French Unique Bcf-66 pistol (Marsigliese is supposed to be a French criminal, after all!). Sometimes it is fitted with sound suppressor. 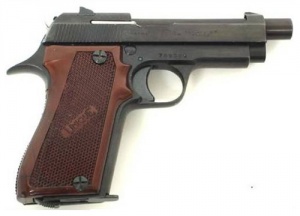 Marsigliese aims his suppressed pistol at a man whom he suppose to be a police informer.

A brown bakelite grip with lanyard loop is seen.

Marsigliese holds a pistol in the final scene.

Marsigliese threatens a hostage boy with his pistol.

During the shootout in the opening scene Marsigliese (Ivan Rassimov) is armed with a pistol that appears to be a Beretta M1951. M1951s are also seen in hands of various criminals.

A criminal fires a Luger in the opening scene.

In several scenes police carry Beretta M38/42 or Beretta M38/44 SMGs. They are seen only in distance or in darkness.

A policeman holds a Beretta SMG in the opening scene.

Numerous uniformed policemen with Beretta SMGs are seen in the final scene.

A criminal fires a Sten in the opening scene.

Another view of the Sten.

Roland's Sten is seen next to his body.

A close view of the receiver. "AR-7" inscription can be seen.

During the attack on Marsigliese's hideout and in the final scene on the airfield several police snipers carry M16 assault rifles with sniper scopes.

Two unnamed detectives of the special squad (Daniele Gabbai (at the left) and Ezio Miani) aims sniper M16s in the final scene.

In several scenes police snipers carry rifles that are seen only partially but most likely they are M1 Carbines, fitted with sniper scopes.

A police sniper holds his rifle at the left. Note the bayonet lug.

A police sniper in ambush.
Retrieved from "https://www.imfdb.org/index.php?title=Colt_38_Special_Squad_(Quelli_della_calibro_38)&oldid=906886"
Categories: